Saving children’s teeth in Sudan – without anaesthetic or drills

Fadil Elamin, Honorary Senior Research Fellow at Queen Mary University of London, published an article for The Conversation on his work as a dentist in Sudan providing care and alternative treatments for children with tooth decay. 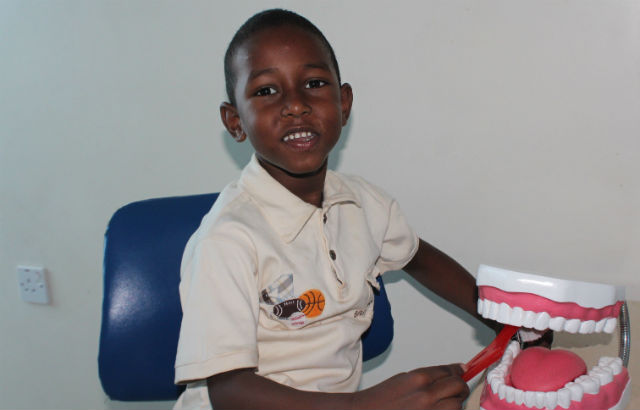 Tooth decay is the most common chronic dental disease in the world. It affects 60-90% of children around the world, according to the World Dental Federation. It is 20 times more common than diabetes and five times more common than asthma. If left untreated, it can cause pain and abscesses and may require root treatment or even extraction. This can traumatise children for life.

The usual way to treat tooth decay is to drill out the rot and then cover the tooth with a thin stainless steel cap. This is considered the gold standard treatment, but it requires a local anaesthetic, lots of time, specialist skills and, for the dentist, the patience of a saint. If the child is anxious – and many are – they often have to be admitted to hospital to have the work carried out under a general anaesthetic.

But consider a child living in poverty in East Africa with no running water or electricity, and the nearest dentist a day or two’s walk away. Would you imagine that their care would be similar to a child in the West? And do you think their decayed teeth would be saved?

I work as a dentist in Sudan providing care for children with these exact circumstances. By the age of 12, almost all children in Sudan know what it is like to have had a tooth extracted. For a country of 40m people, we have just eight children’s dentists. 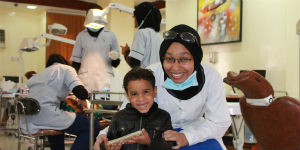 What if I were to tell you that all we need to do to save a child’s tooth is to ignore the rot, seal it by gluing a cap on the bad tooth and do nothing else? And would you believe me if I told you that this is just as effective as the costly standard treatment?

A 2006 analysis of primary care records, showed that this simple technique, known as the Hall technique, was effective in treating children in Scotland. It works by starving the tooth-rotting germs of oxygen.

Even though this technique is supported by scientific evidence, it has been shunned by many dentists around the world as there was no randomised controlled trial proving its effectiveness compared with accepted conventional techniques. So with colleagues at Queen Mary University of London, we set out to conduct just such a trial.

We randomly assigned 164 children to receive one of two treatments. One group received the gold standard of care. The child received a local anaesthetic and the bad tooth was then drilled to remove the decay. The cap was fitted after adjusting it to the right shape and size of the tooth – which is fiddly – and then glued. The other group received the Hall technique. We pushed the metal cap gently onto the tooth and glued it on without any injections or drilling.

Capping and gluing is common to both techniques but requires a considerable adjustment in the conventional technique. None is required for the Hall technique.

The study was done at a time in Sudan when Omar Al-Bashir’s brutal regime was coming to an end. Daily life was, and still is, tough. The situation affected the project on many levels. 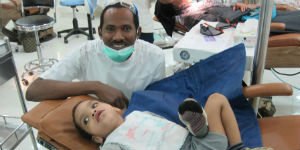 While most scientists take the internet for granted, we don’t. Blackouts are common and can last for weeks or months, so a high level of organisation is needed. Even in the capital, Khartoum, electricity and water supplies are not guaranteed and could be out for days.

Writing up this study took a while as we fit research around when we have internet access and are able to collaborate online with partners in Sudan and internationally. But the Sudanese are generally happy people and nothing seems to faze them. The staff were fantastic and did whatever they could to help under these difficult conditions.

The results of our study, published in open access journal PLOS ONE, prove that the Hall technique performs as well as the gold standard in all clinical aspects, such as the survival of the tooth, gum health, faulty bite (occlusion) and abscess formation, even when done by less experienced operators.

We did not need to use drills or injections and sometimes did not even need a dental chair and it takes on average less than 10 minutes. Price haggling is a way of life in Africa and we often got asked by parents: “Do you really expect me to pay for this, it was only two minutes?!” So, we spend the next half an hour explaining the science, and it all seems to work out in the end! 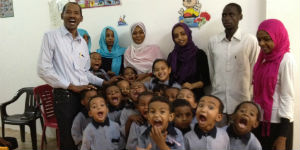 In addition to saving teeth, the Hall technique performed as well as the gold standard in terms of the caps remaining in place over a two-year follow-up. And the children were much happier just before the treatment, just after it, and a year later. In fact, some children were demanding the caps to be fitted on their brothers and sisters. The only crying we heard in the clinic was when a child’s sibling got a cap and they didn’t.

Keeping costs low is very important for maintaining public health systems around the world, and this technique proved to be much cheaper than conventional techniques of drilling and capping. But changes in healthcare policy must be supported by evidence, and our study goes some way to providing that.

The Hall technique, if widely adopted, could have a big impact on many overstretched public health services around the world, particularly those in developing countries and those with little access to dental services, giving children a better chance of keeping their teeth.

This article was originally published in The Conversation on 24 June 2019.