A new project to improve asthma in African children has been officially launched at an event in Durban, South Africa. 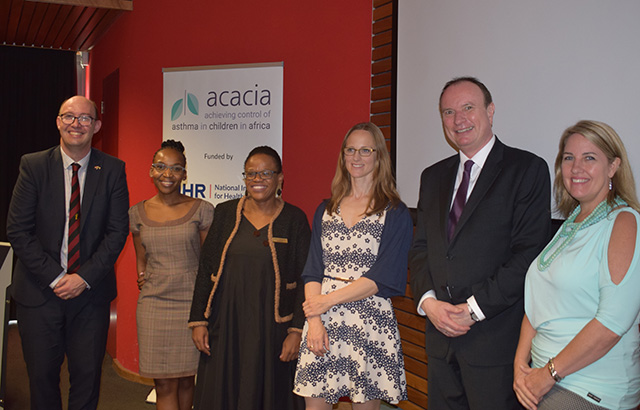 The ‘Achieving Control of Asthma in Children In Africa’ (ACACIA) study, led by Queen Mary University of London, is a £2 million study funded by the National Institute for Health Research (NIHR). It will involve 3,000 children aged between 12 and 16 years old who have symptoms of asthma, and take place over three years in Ghana, Nigeria, South Africa, Uganda, Malawi and Zimbabwe.

The launch event at University of KwaZulu-Natal (UKZN) included a speech by Ben Llewellyn-Jones OBE, British Deputy High Commissioner to South Africa, who announced his support for the study.

Asthma in African children was previously not thought to be a major health issue. But more African children are developing the long-term disease as they move to urban areas. South Africa has one of the highest mortality rates from asthma worldwide. Recent surveys in schools found that between 10 and 20 per cent of children in sub-Saharan Africa aged 13 to 14 have ongoing asthma symptoms.

A similar UK study led by the Queen Mary University of London research group found that 46 per cent of young people had suboptimal asthma control, and that many young people faced a range of barriers to good asthma management, including lack of knowledge, forgetfulness and perceived stigma.

The team will use the new African school survey data to design and test a school-based intervention, which will include the adaption of an existing theatre performance, written by the Nigerian-born playwright Tunde Euba, which addresses asthma knowledge and stigma.

Professor Jonathan Grigg from Queen Mary’s Blizard Institute, and Director of the NIHR Global Health Research Group, said: “Children in sub Saharan Africa are increasingly developing diseases of urbanisation, such as asthma. Although other countries, such as the UK, may have higher levels of asthma, the extraordinarily high number of asthma-related deaths in Africa is a major concern. Working with leading paediatricians across Africa, this project will allow us to describe the burden of asthma in children, and the reasons underlying poor asthma control.”

Professor Refiloe Masekela, who is conducting the study at UKZN said: “For the first time, this epidemiology study will be looking at the severity of asthma and at factors that impact asthma control and adherence in school-going adolescent children. The outcome of this study will then inform future strategies and interventions to reduce morbidity and mortality among affected children in Africa.”