Deaths from severe bleeding after major trauma have been reduced by 40% over the last decade through a programme of research and innovation led by Queen Mary University of London, Barts Health NHS Trust and NHS Blood and Transplant. 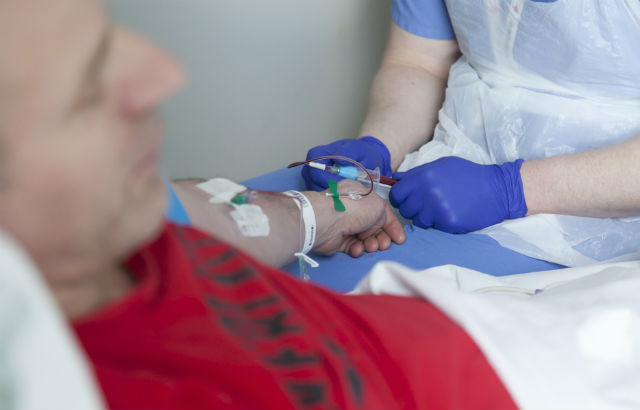 The study reporting the findings has been published in Annals of Surgery.

Researchers examined the outcomes of 1169 critically bleeding trauma patients who were managed with a ‘major haemorrhage protocol’ at the Royal London Hospital Major Trauma Centre between 2008 and 2017. This “Code Red” protocol was developed over time and involved new approaches to diagnosis and treatment of trauma-induced problems with blood clotting. These were introduced as a result of research conducted by the Centre for Trauma Sciences at Queen Mary and its partners.

Injuries that cause critical bleeding include those that are due to knife violence.  The profile of trauma services has increased in recent years due to a surge in knife attacks in the capital. Official figures show there were 15,023 such offences in the year to June 2019, of which 63 were fatal.

In 2008, 48 per cent of critically bleeding trauma patients died in hospital, a proportion reduced to 27 per cent by 2017. These survivors were also more likely to be discharged to their homes, rather than to other facilities (57 per cent of survivors in 2008 rising to 73 per cent in 2017).

During this time a trauma research team worked alongside the clinical trauma team 24 hours a day, seven days a week. This joint working led to dramatic changes in resuscitation practice. Trauma teams stopped giving clear fluid infusions to patients while they were bleeding, instead using only red blood cell transfusions and clotting components derived from blood (such as plasma, platelets and cryoprecipitate transfusions). This included delivering blood to patients even before they reached hospital.

New devices to diagnose clotting problems at the patient bedside were introduced, allowing patient care to be individualised in real time. The clinical teams also introduced many human factor changes to smooth the delivery of life saving therapies and operation.

With all these changes, patients’ clotting problems could be managed and bleeding could be controlled. The overall number of red blood cell transfusions required by each patient fell significantly over the decade, from an average of 12 units in the first 24 hours in 2008, to only four units in 2017. The number of patients who required a ‘massive’ transfusion (10 or more units of red blood cell transfusions – essentially replacing their entire blood volume) fell by more than half, from 68 per cent in 2008 to 33 per cent in 2017.

Co-author Professor Karim Brohi, Consultant Trauma Surgeon at Barts Health NHS Trust, Professor of Trauma Sciences at Queen Mary University of London and Director of the London Trauma System, said: “Over ten years clinical and research trauma teams have worked hand-in-hand to understand what happens in the first few minutes after injury and how we can stop patients bleeding to death. We have reduced deaths by nearly a half, which is an incredible achievement in such a short period of time. There are still many opportunities to improve survival and this study also shows us where we need to focus our attention for the future.”

NHS Blood and Transplant Medical and Research Director Gail Miflin said: “This work demonstrates the central role of blood transfusion resuscitation in the management of patients with major bleeding in trauma. The established partnership between NHSBT, Queen Mary University of London and Barts Health Trust has resulted in the integration of research into everyday transfusion practice of bleeding in trauma. This has improved the overall survival of patients over the last decade. We are delighted to be part of this work and look forward to working more closely with our clinical and academic partners at Barts Health Trust and Queen Mary to further improve outcomes of patients.’’

Research projects leading to these changes were funded by several bodies including Barts Charity, the National Institute for Health Research, and the European Commission.

The Centre for Trauma Science’s work is made possible thanks to a £3m grant from Barts Charity. The Charity’s Chief Executive, Fiona Miller Smith, said: “Barts Charity are extremely proud to support the passionate and talented team at the Centre for Trauma Sciences. The centre is part of our ongoing commitment to fund world-leading care in East London that will save even more lives as further developments come on stream.  We’re very grateful to our donors who make funding like this possible.”