Call for ban on cartoons on unhealthy food packaging

In the biggest survey of its kind, new research by Action on Sugar and Action on Salt, based at Queen Mary University of London, has found that half of the 526 food and drink products which use cartoons on their packs are unnecessarily high in fat, sugar and/or salt. 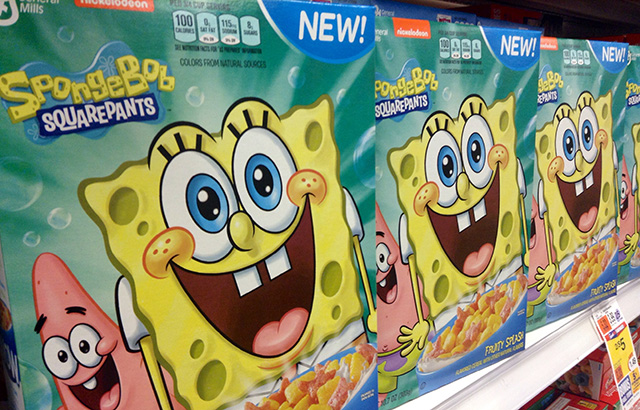 The researchers say that these cartoons can manipulate children and parents into purchasing ‘dangerously’ unhealthy products, which can encourage pester power and excessive consumption.

If marketing on children’s packaging were to follow the same advertising codes as set by the Committee for Advertising Practices for broadcast advertising, half would fail the eligibility criteria and would not be allowed to be advertised to audiences under the age of 16.

Action on Salt, Action on Sugar and Children’s Food Campaign call for this criteria to be extended to all forms of media, and to any programme watched by a child, as is currently being discussed in the Governments’ latest consultation on further advertising restrictions for products high in fat, salt and sugar.

More than one in five products used licensed characters (e.g. Disney, Peppa Pig and Paw Patrol) that are often well recognised by young children, and more than a third were found on confectionery, chocolate, cakes and ice cream.

Of the 94 products that use licensed characters, 32 (34 per cent) have a red label for either fat, saturated fat, sugars and/or salt, classifying them as being unhealthy. This includes Peppa Pig Candy Bites with 99 per cent sugar and Paw Patrol Milk Chocolate Coins with 60 per cent sugar; meaning that eating four coins would provide a 4-6 year old with nearly two thirds of their maximum daily recommended intake of sugar.

A select few companies have used licensed characters responsibly to promote water, fruit or vegetables. Some had also opted for lower sugar variants including Disney Kitchen cake mixes which have 15-16g sugar per 100g.

Heinz use an array of licensed characters, from Disney’s Frozen to Peppa Pig, with various health claims on pack such as ‘1 of your 5 a day’ and added vitamin D. However, whilst they do not have red nutrition warning labels per 100g, a can of their pasta shapes with tomato sauce would provide 40 per cent of the maximum recommended intake of salt for a 1-3 year old, without taking into account additions such as cheese or toast. In comparison, a product with plainer packaging e.g. Asda’s Spaghetti Loops in Tomato Sauce contain a third less salt.

In a Children’s Food Campaign Parents’ Jury survey in 2018, more than 9 in 10 parents said they supported the Government bringing in restrictions on the use of child-friendly TV and film characters on foods high in fat, salt and sugar. The use of these characters, and associated toys, was the second highest issue of concern for parents in terms of junk food marketing tactics used to target children, after TV advertising.

Products with brand mascots and characters

Meanwhile, of the 434 products that use brand mascots and characters appealing to children, 53 per cent would receive a red (high) warning label on pack for sugar. Dr. Moo Quick Milk Magic Sipper Strawberry was packed with the most sugar – 94.0g/100g – over 23 tsp of sugar.

Only 18 healthy food and drink products (such as fruit, vegetables and water) used on-pack child friendly animations. Lidl came out as the best retailer in that respect with their Oaklands range of fruit and vegetables.

The majority of products did not have ‘traffic light’ nutrition labelling, making it difficult for people to work out at a glance what is and isn’t healthy. Action on Salt and Action on Sugar are calling for mandatory ‘traffic light’ nutrition labels on front of pack. Tools are available to help people make a healthier choice such as FoodSwitch, the free smartphone app, which allows customers to scan the barcode of a product and see healthier alternatives.

‘A serious risk to the future health of children’

Sonia Pombo, Campaign Lead at Action on Salt based at Queen Mary’s Wolfson Institute of Preventive Medicine, said: “Parents want to make healthy choices for their children, but companies are not making this easy for them. The food industry has a moral duty to stop putting profits first and sell their products responsibly. There is plenty of opportunity for companies to either reformulate and make their products healthier, or make their already healthier products more appealing to children. Until then, the government must intervene and ensure all food and drink manufacturers at least display ‘traffic light’ labelling so parents can see, at a glance, what is in the food.”

Graham MacGregor, Professor of Cardiovascular Medicine at Queen Mary’s Wolfson Institute of Preventive Medicine and Chairman of Action on Sugar and Action on Salt said: “Many of the food products exposed in our survey present a serious risk to the future health and wellbeing of children. High sugar products increase the risk of obesity, type 2 diabetes, various cancers and tooth decay and high salt products put up blood pressure, which leads to cardiovascular disease later in life. The government needs to restrict the use of such packaging on unhealthy products including marketing them to children.”

Tom Watson MP, Deputy Leader of the Labour Party said: “This research reveals the scale of irresponsibility in the industry. We’re in the midst of a child obesity crisis and companies are using cartoons to advertise their junk foods to kids. It’s unacceptable. It’s time we changed the rules to get these cartoons off our packs.”