Study sheds new light on how cells interact with their surroundings

Researchers from Queen Mary University of London identify novel pathway behind how cells sense and respond to their environment. 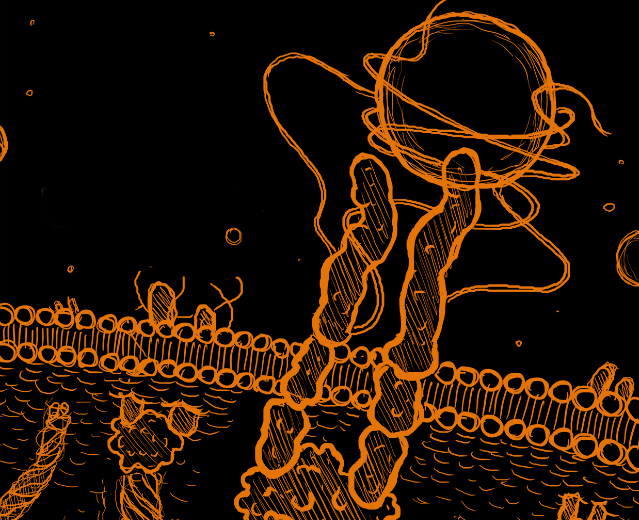 Sketch of the syndecan-4 molecule connecting the cell inside with the space outside. Credit: 3DforScience/ 3DforScience.com

The study, published today in Nature Materials, found that a previously overlooked protein, known as syndecan-4, is important for transmitting external signals into the cell.

Syndecan-4 senses movements outside the cell and converts them into biochemical signals which, the researchers found, ‘tune’ the way the cells respond to tension and movement.

The ability for cells to react to mechanical forces is fundamental for many biological processes and changes in cell mechanics have been linked with several diseases, including cancer.

Working with collaborators at Imperial College London and Tampere University, Finland, the researchers used magnets to ‘tug’ on microscopic beads attached to syndecan-4 on the cell’s surface. The team found that when they applied force to syndecan-4 molecules, the whole cell stiffened in response.

Using a series of pharmacological inhibitors the researchers were then able to pinpoint key molecules involved in orchestrating this cell-wide reaction. They found that syndecan-4 works independently to initiate the cell’s response to mechanical forces, before recruiting a series of chemical messengers within the cell and other cell surface receptors to engineer the global response.

The observations differ from previous studies on other mechanical sensors, such as integrins, where changes in cell behaviour were only observed at the precise location where the force is applied.

Syndecan-4 sits on the surface of the cell, with one end pointing into the cell and the other outside. It is therefore in a prime position to sense conditions outside the cell and convert them into signals inside the cell.

Whilst the importance of syndecan-4 in cell mechanics had previously been suggested, this study provides the first explanation of how the protein enables cells to respond to external cues.

Dr Stephen Thorpe, Research Co-Investigator at Queen Mary University of London and co-lead author of the study, said: “As syndecan-4 is expressed on almost all of our cells, and practically all of our tissues are physically loaded to some extent, the mechanical mechanism we’ve uncovered could be targeted to alter any number of biological processes to treat disease.”

Prof David Lee, co-author at Queen Mary University of London said: “Research into how cells transmit mechanical signals has until now mainly focused on a class of cell surface receptors known as integrins, and our knowledge on how other receptors like syndecans react with their environment has been sparse. While the role of integrin-mediated mechanosignalling has been extensively studied in the field of cancer biology in recent years, a more integrative approach that includes this novel pathway could produce new insights into the disease.”