A predictive visual analytics platform developed at Queen Mary will be grown as part of a strategic ‘Scaling Partner’ relationship between Dragonfly Technology Solutions Ltd and Capita. 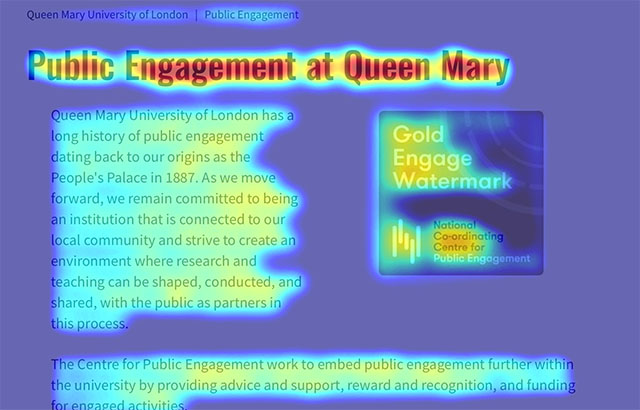 Dragonfly AI simulates how attention works in the brain to show you what your audience sees first. Credit: Hamit Soyel

Dragonfly AI, developed by Professor Peter McOwan and Dr Hamit Soyel from the School of Electronic Engineering and Computer Science, gives marketers the power to predict, analyse and influence human attention in a world where people are constantly overloaded with information.

This predictive visual analytics platform instantly shows what the human brain sees first, enabling organisations and brands to optimise the performance of their content whether moving or static, digital or physical.

Capita - a digital services, software and consulting business - will provide business development services to Dragonfly and becomes a significant shareholder in the business.

Dr Hamit Soyel, Chief Science Officer and Founding Inventor at Dragonflyai.co, said: “Back in 2013 Professor Peter McOwan and I were giving a talk about robots at the Science Museum. At the last moment we added some recent research on biologically inspired visual processing that sparked the interest of a marketing specialist in the audience who could see business opportunities.

“From this DragonflyAI was born, which has grown substantially and now looks set for further significant growth through this exciting collaboration with Capita. Peter would have been over the moon to see this partnership that we could only dreamed of back then.”

A decade of research

Originally developed over a decade by the Cognitive Sciences Research Group at Queen Mary and independently verified by the Massachusetts Institute of Technology (MIT), this is market-defining technology used by household names like GSK, Hachette, McDonalds and NBC Universal.

Dragonfly AI will help Capita and its clients win the attention of audiences, maximise the value of customer interactions and enable data-driven design decisions that improve customer satisfaction.

Adam Daykin, Head of Technology Transfer (Tech & Eng), Queen Mary Innovation, said: “In 2009 we worked with Professor Peter McOwan on a spot the difference app based on algorithms that predict where the eye falls. Over the next 10 years, with significant improvements in the technology, changes in application, and iterations of business model DragonflyAI resulted.

“There have been some exceptional collaborators, partners and entrepreneurs who have contributed to DragonflyAI’s success and the recent addition of Capita provides a phenomenal opportunity as a sales channel to global corporations. Peter would have been very proud of this and it is a mark of his genius.”

Jon Lewis, Capita chief executive, added: “Our partnership with Dragonfly AI demonstrates Capita’s dedication to being at the cutting edge of technology and will create UK-based digital jobs while delivering strategic value for Capita, our clients and Dragonfly AI.”