Queen Mary researchers have used geographic profiling to uncover the truth behind how the non-native birds arrived and spread in Britain. 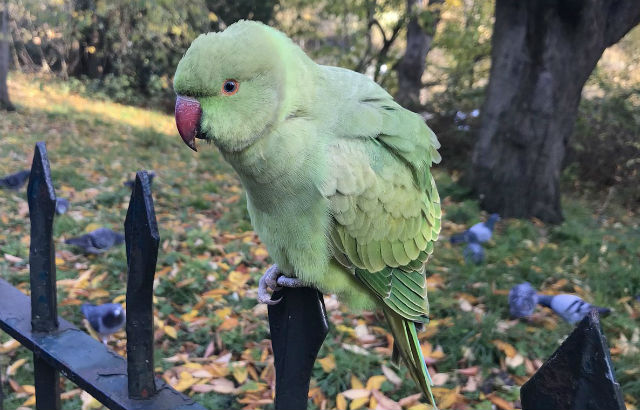 A parakeet sitting on a fence

The study published today in the Journal of Zoology shows that Britain’s booming parakeet population has grown from numerous small-scale accidental and intentional pet releases dispelling common myths about the bird’s origins in the UK.

Dr Le Comber said: “The ring-necked parakeet has become a successful invasive species in 34 countries on five continents. The fun legends relating to the origins of the UK’s parakeets are probably not going to go away any time soon. However, our research only found evidence to support the belief of most ornithologists: the spread of parakeets in the UK is likely a consequence of repeated releases and introductions, and nothing to do with publicity stunts by musicians or movie stars.”

Stories have circulated in recent years about how parakeets have become one of Britain’s most successful alien species.

Despite sightings dating back to the 1860s, many insist that Jimi Hendrix first released a pair on Carnaby Street. Others claim a flock was let go from the set of the Bogart and Hepburn classic The African Queen when filming wrapped in 1951.

The research found that none of the ‘suspect sites’ connected to origin myths showed up prominently in the geoprofile of more than 5,000 unique records dating from 1968 - 2018.

The findings were backed by an extensive search of archived newspaper articles conducted at Goldsmiths, University of London, which found thousands of pages of news stories about parakeets written between 1804 and 2008 but failed to locate a single item of news coverage documenting the escape or release of parakeets in the context of the four main origin myths.

Geographic profiling typically maps crime sites, such as the location of murder victims’ bodies. This is overlaid on a map of the area of interest to produce a geoprofile and narrow down the area where the perpetrator is likely to live or work.

When applied to biological data, the model can identify the origin sites of diseases or introduction sites of invasive species. Dr Sally Faulkner, Lecturer in conservation and ecology from Queen Mary University of London, said: “Geographic profiling was originally developed to solve the problem of information overload in cases of serial crime. More recently it has also been shown to be useful in analogous problems in biology, for example locating animal roost sites or identifying source populations of invasive species or sources of disease outbreaks. We have also shown that citizen science data in the form of public sightings could be used as input information to estimate source locations of invasive species equally effectively as intensive (and expensive) trap data.”