The international response to refugees and displaced people is once again making the news, particularly in relation to the Venezuelan displacement and the immigration policy of the United States of America. 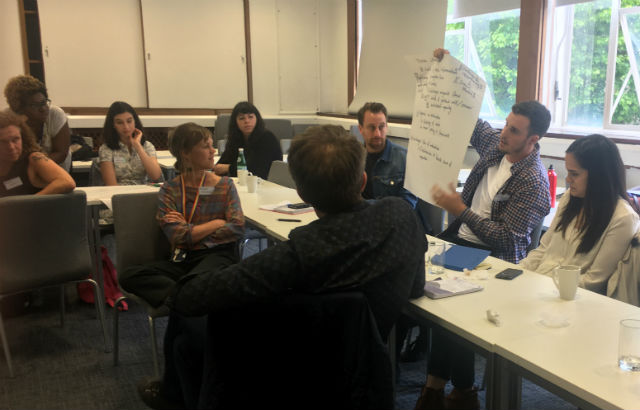 Photograph: Academics working during the interdisciplinary workshop at Queen Mary

In response, academics from Queen Mary University of London organised a space of reflection and discussion to better understand displacement and protection of refugees in Latin America.

The interdisciplinary workshop, funded through Queen Mary’s Institute for Humanities and Social Sciences (IHSS) and supported by the Centre for the Study of Migration, explored different approaches to refugee protection as well as policy implementation and the experiences of refugees themselves. The aim of the initiative was to understand the main challenges and best practices of refugee protection in Latin America, 35 years after several countries in the region signed the Cartagena Declaration.

The Cartagena Declaration is a non-binding instrument for the protection of refugees which was adopted in Latin America in 1984 by delegates from ten countries. The Declaration has since been incorporated into the national laws and state practices of 14 countries.

The participatory format of the workshop encouraged discussion about the dynamics of forced displacement in Latin America while at the same time provided a space of reflection, aiming to change the narrative around forced displacement and refugee responses so that it is not seen as an issue dealt with only by the global north.

Four key speakers, Dr Beatriz Sanchez, Professor Diego Acosta, Dr Vickie Knox and Professor Stephen Meili, all experts on migration issues, provided an interdisciplinary account of the drivers and consequences of displacement in Latin America, as well as the responses by other states in the region.

You can listen to the four presentations here.

Dr Marcia Vera Espinoza, Lecturer in Human Geography at Queen Mary said: “The workshop allowed a relevant discussion about the state of displacement and refugee protection in the region by encouraging knowledge sharing among academics, students and practitioners.”

Other topics that were explored in detail included issues such as environmental migration, the responses to the current Venezuelan displacement, violence as a driver of displacement from the northern triangle and the role of constitutionalised human rights law. The Northern Triangle refers to Guatemala, Honduras and El Salvador, which has one of the highest intentional homicide rates in the region.

Dr Vera Espinoza added: “This timely discussion emphasised the need of an in-depth understanding of the on-going displacements in Latin America as well as the contradictory responses of the states in the region and the larger international community.

“We also reflected on the geographical boundaries of knowledge production on forced migration. Speakers and participants were fantastic.”

Professor Stephen Meili, Director of the Immigration and Human Rights Clinic at the University of Minnesota Law School said: “The workshop was wonderful. The students were great, and I enjoyed hearing about refugee issues in Latin America from a variety of academic perspectives.”

About Queen Mary’s Institute for Humanities and Social Sciences

The Institute for Humanities and Social Sciences is an ideas-generating hub for the Faculty of Humanities and Social Sciences at Queen Mary University of London. It seeks to enable inter-disciplinary and cross-disciplinary conversations, by bringing together the expertise of some of the world’s finest scholars from within Queen Mary University of London and from outside.

The Institute enables engagements between the fifteen Research Centres which are supported by the Faculty of Humanities and Social Sciences and led by members of Queen Mary’s distinguished academic staff.

The Institute is also home to a dynamic group of visiting fellows whose research interests align with the annual thematic programme.