Queen Mary’s Centre for Research in Equality and Diversity (CRED) has hosted a special event marking the forthcoming 50th anniversary of the 1970 Equal Pay Act. 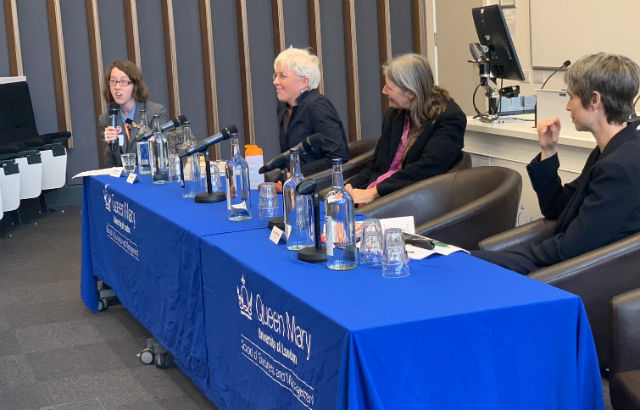 Despite this, the gender pay gap has persisted in the UK and internationally. The gap between those who run organisations and the average pay of workers has also become increasingly wider. Whilst there are several explanatory factors when it comes to unfair pay, including gender and ethnic segregation, workplace practices as well as discrimination,  these explanations that remain as relevant today as 50 years ago. Professor Geraldine Healy commented that “the long-term effects of unequal pay are rarely acknowledged yet they contribute to lower lifetime earnings, the pensions pay gap and poverty in old age. What appears to be a problem for the individual becomes a problem for society. It is therefore crucial that employers address the undervaluing of all women’s work to remove the gender/ethnicity pay gap.”

The timing of the event was crucial since it is also near to the UK’s Equal Pay Day which is observed on 14 November. This is the date after which women effectively work for free for the rest of the year, according to analysis of the gender pay gap by The Fawcett Society.

The CRED event attracted a unique combination of speakers, including campaigning organisations such as The Equality Trust and The Fawcett Society, Business in the Community, PWC, Unite The Union, YESS Law, academics researching the field and two women who had challenged their own equal pay.

The journalist Carrie Gracie shared her own story of pay inequality at the BBC. When she initially raised her concerns at the BBC, she stated that she was deliberately hindered by a “rigged system” – one which makes it difficult for women to challenge discrimination.

“They [the BBC] sought to delay, distract and deny […] when they eventually had to concede something, they did so in a transactional way, they threw money at the problem, hoping that I would just go away,” said Carrie Gracie.

“This was never about money. I wanted recognition of the equal value of my work,” she added. Summing up, she said that equal pay in 2019 was “an extremely rigged and unsatisfactory game.”

Professor Liz Schafer from Royal Holloway, University of London shared her personal experiences of fighting for equal pay. She highlighted that there are huge groups of women who are still being treated unequally, including ethnic minorities, and spoke of the tribunal process as a traumatic one in which women had to prove that they were of equal value.

“I could do it [take the case to a tribunal] because I was in a professorial role, which was permanent, I was hard to dislodge. I am also white, middle class and bolshie. I was in a position of privilege,” she said.

Emma Webster, a lawyer from Your Employment Settlement Service (YESS) also provided her professional insights. She thanked Carrie Gracie for her work and her donation of her back-pay, which helped to set up the Equal Pay Advice Service, run by The Fawcett Society and YESS Law in partnership. “Everyone woman should be enabled to have advice, to know where they stand, in a system where the odds are stacked against them,” she said.

On the subject of the human resource department of the employer institution, Emma Webster had a cautionary message. “HR is not the employee’s friend, it is a management tool. They [HR] might be sympathetic but ultimately they have to do what the managers want them to do. They are not going to be transparent with you at all times,” she said. Co-organiser, Emily Pfefer, stated that "our event delivered a key message: collectively talking about and questioning established pay practices, even when they are presented as transparent, is an essential strategy in wiping out the gender pay gap. Critical questions of how we value work and the workers who do it must be raised."