Accent bias exists but people can resist the urge to discriminate

A new study led by Queen Mary University of London has shown that whilst accent bias continues to be pervasive in the UK, people in positions of power have the capacity to resist this effect. 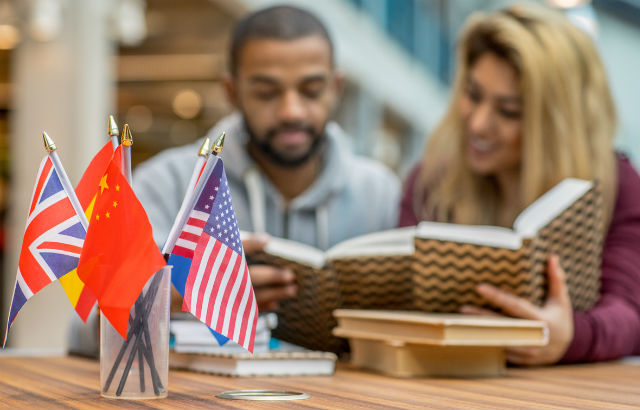 Studying behind flags on a desk

The research project, Accent Bias in Britain, was undertaken in collaboration with the University of York. It examined current attitudes to English regional, class, and ethnic accents, and investigated whether unconscious accent bias plays a role in how candidates are evaluated in job interviews.

The study found that when people were asked for their opinions of simple accent labels such as “Cockney” or “Birmingham English”, they tended to penalise non-standard working-class and ethnic accents and uphold middle-class “standard” speech as the most prestigious.

The study also found some reduction in accent bias – the distances between the highest and lowest rated accents are smaller in this research compared to earlier studies – but there is a very established and enduring ‘hierarchy of accents’ in the UK.

When people heard actual voices of candidates in interviews for a job in a law firm, the differences they drew between accents were much smaller. Nevertheless, working-class and ethnic London accents were still rated significantly lower, especially by listeners who were older, lived in Southern England, and came from a higher social class.

Lawyers and recruiters in the legal profession were more nuanced than the general public when making such judgments. When asked to evaluate the quality of candidates’ interview responses, lawyers and professional recruiters were able to switch off their biases and attend very well to the quality of the response.

The results show that, with increased awareness and in specific contexts, people can suppress their biases, for example when interviewing candidates for employment.

Erez Levon, Professor of Sociolinguistics and Principal Investigator on the project said: “Accent bias exists. We all have automatic associations with particular voices. Bias becomes discrimination when we allow these associations to govern our judgement of unrelated traits such as intelligence or competence.

“Our work offers hope that people have the capacity to prevent their automatic biases from affecting their judgement.”

New ways in which bias can be negated

Professor Devyani Sharma, Head of the Department of Linguistics at Queen Mary, and Co-Investigator on the project said: “This work sheds new light on the way in which bias can creep into judgements, but also the way in which it can be negated.

“One goal of unconscious bias training can therefore be, not the complete elimination of long-held and often unconscious preferences, but the management of their impact on judgement.”

Dr Dominic Watt from the University of York's Department of Language and Linguistic Science said: “The results of the study give grounds for optimism, in that although accent-based prejudice seems to be all around us in this country, it seems to be possible for people in positions of power to put these biases to one side when it really counts.

“One of the goals of the Accent Bias in Britain project is to develop interventions to help recruiters to understand how harmful accent-based discrimination can be, and how assumptions about language that many people think are 'common sense' are rooted in arbitrary and subjective preferences rather than linguistic reality.”

The researchers caution that whilst lawyers were found to be able to disregard bias in a controlled setting, it does not negate the potential for accent bias in many other aspects of professional life. A 2015 Social Mobility Commission report pointed to the role of many other aspects of ‘cultural fit’ in hiring decisions. However, the results do demonstrate that the effects of accent bias can be overcome in certain situations.