Academics from Queen Mary University of London helped raise the profile of tuberculosis (TB) and the need for increased funding at the UN General Assembly in New York, which was attended by global Heads of State and government ministers. 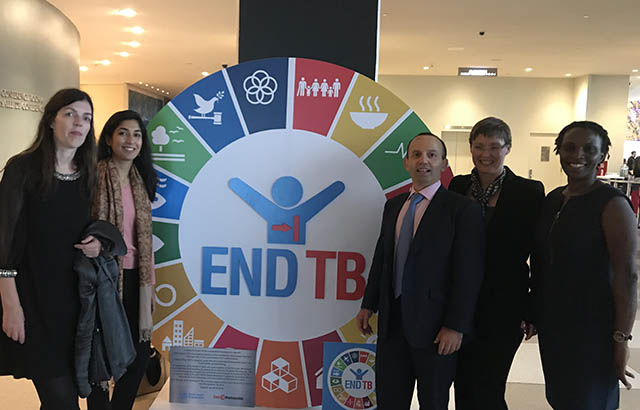 TB infects some 10.4 million people across the world, and is fuelled by poverty, inequality, migration and conflict. Experts say that better health and social welfare systems, and more investment, are needed to stop the global health crisis, and better tools are needed to overcome the estimated 600,000 new drug-resistant cases of TB  every year.

Dr Heinke Kunst and Dr Simon Tiberi attended the first ever UN General Assembly meeting on TB at their headquarters in New York on behalf of Queen Mary, in a trip which was supported by Barts Charity.

The meeting concluded with the adoption of an ambitious political declaration on TB, endorsed by Heads of State. This included a commitment to finding 40 million undiagnosed cases of TB by 2022 and increasing annual investment in TB to $13 billion by that time. The World Health Organization target is to end TB by 2030.

Agreement to hold a dedicated high-level meetings on a specialised topic occurs only in exceptional circumstances. This was the fifth time the UN has called for a high-level meeting devoted to a health issue, the first being the 2001 Special Session on HIV/AIDS, followed by meetings in later years on non-communicable Diseases, Ebola, and antimicrobial Resistance.

Attendees at this meeting included the presidents of several African countries, government ministers including the UK’s Secretary of State for International Development, the deputy UN Secretary General, the WHO Director-General, community representatives, researchers, academics, parliamentarians, and other partners. 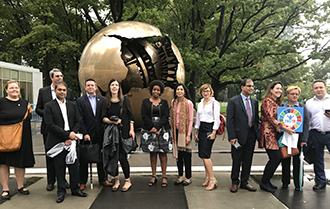 “We’re very grateful for the funding by Barts Charity, without which we would not been able to attend the event, and for the commitment made by Queen Mary in supporting us on the trip.”

Dr Simon Tiberi, Honorary senior lecturer at Queen Mary, said: “This is an important milestone in raising awareness on the disease and holding governments accountable for TB in their respective countries. The TB community now hopes that this will soon lead to pledges and increased funding needed to reach the ambitious targets.

“We felt very privileged to be able to attend and meet with civil society leaders, researchers and clinicians, where we highlighted the need for better cooperation, increased funding to tackle increasing antimicrobial resistance, access to better diagnostics, shorter drug regimens and free access to healthcare.”

Francesca Gliubich, Director of Grants at Barts Charity: “The last few years have seen a surge of TB in many cities like London. Barts Charity is proud of supporting Dr Kunst’s work to address this health challenge, through funding for research and by sponsoring the group participation at the UN General Assembly in New York.”

Barts Health NHS Trust and Queen Mary are doubling up their commitment against TB by leading in key areas such as migrant screening, latent TB infection through the CATAPULT trial funded by Barts Charity, host directed therapies and drug resistant TB.