Teams from schools across London competed to solve the world’s water problems with Lego robots at an event hosted by Queen Mary University of London’s School of Electronic Engineering and Computer Science (EECS). 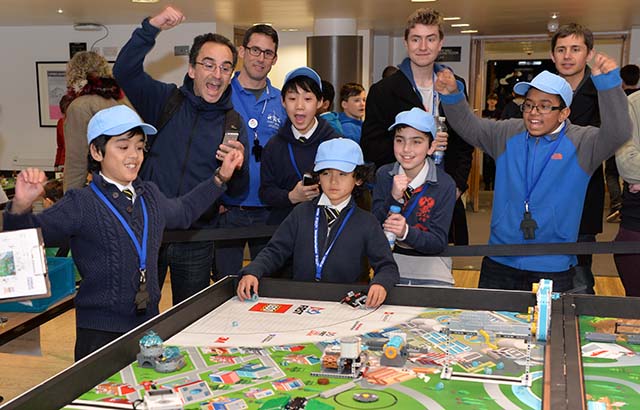 School kids at the Lego League

Fifteen teams* took part in the IET (Institution of Engineering and Technology) First Lego League Tournament which took place in the People’s Palace on Saturday 20th January for the third year running.

This year’s theme and world problem was water, and questioned how to improve the way people find, transport, use, or dispose of it. The tournament was the culmination of weeks of preparation, where students have worked in teams to identify a specific problem, design an innovative solution with robotic models, and share their investigation with a professional for feedback.

The teams converged on east London to present their work to judges from the university and test their Lego robots against each other as well as show how they had worked together as a team.

The overall champions award was given to the team ‘Water works’, with ‘Detrasherfiers II’ named runners up. Two home educated teams also won First Lego League Cups and a place in the UK and NI finals.

The best event yet

More than 30 lecturers, staff, and students from EECS helped to support and deliver the event which encourages the pupils to learn about elements of electronic engineering, robotics and computer science taught at EECS.

Mr Ho Huen, tournament organiser and Electronics Lab Manager in EECS, said: “It’s the students, teachers and volunteers that make the event a success and this was the best yet! It was really satisfying to know the teams had a great time and were inspired by the event.”

Winning teams from each regional tournament will take part in the UK and Ireland Final at the University of West of England (UWE) on 24th February 2018. The top achieving teams will receive the opportunity to represent their country and the IET on a global stage, competing in Hungary, Estonia, and the USA later in the year.

Mandy Workman, IET Education Manager, said: “The programme brings enjoyment to STEM subjects as the students get hands-on experience with robotics, and designing innovative solutions. Developing computer programming, teamwork, problem-solving and communications skills has never been so much fun!

“The League is the world’s largest STEM competition with 32,000 teams in more than 80 countries, and the IET are proud to be the operational partners for the programme in the UK and Ireland.”

The First Lego League is part of a wider IET education programme, made up of a whole host of teaching resources and activities to inspire and attract the engineers of tomorrow.

For more information about this year’s competition, please visit the official website at First Lego League.