Scientists at Queen Mary University of London have developed an app to understand why some rhythms are more difficult to perform than others. 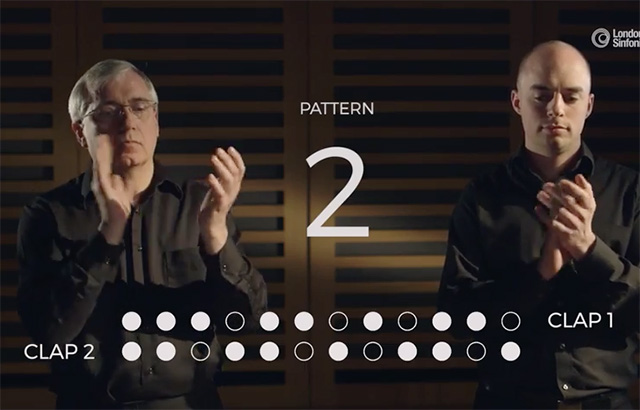 They collected and analysed a huge dataset of more than 100,000 people and found that changing rhythm is more difficult than playing a complex individual rhythm.

The app challenges users to play Clapping Music - a ground-breaking piece of music written by contemporary classical composer Steve Reich which is performed entirely by clapping.

In the original piece, two people clap the same short rhythmic pattern while one shifts the pattern gradually until the patterns align again.

Rather than clapping, players tap in a performance area in the lower part of the screen.

Users from more than 100 countries have downloaded the app more than 250,000 times since the launch in July 2015. The research focused on the first 12 months, including 109,303 players and a total of 46 million rows of gameplay data.

The results, published in the journal PLOSONE, provide a new understanding of the musical factors that determine how easy or difficult it is to play a rhythm.

Traditionally this has been studied in the lab with small numbers of participants reproducing simple artificial rhythms. These results extend the scope to performance of a real piece of music and a much broader demographic.

Lead author Dr Sam Duffy, from Queen Mary’s School of Electronic Engineering and Computer Science, said: “It is quite rare in music psychology to study the performance of rhythms that change, especially when played in ensemble with another player, and yet these are very common in actual music.”

She added: “In spite of the apparent simplicity of Clapping Music, it is a challenging piece to perform and the app generated a very large and complex set of data to analyse.”

In previous research, theoretical models have proven useful in predicting individual rhythm reproduction performance for artificial rhythms in the laboratory. However, a striking finding from this research is that none of these measures predicted how accurately players performed the 12 different rhythms that make up Clapping Music.

This could mean that these measures only apply to the simple artificial rhythms used in laboratory studies but a more likely interpretation is that they do apply to real music but have a small effect when compared to the much greater influence of transition difficulty between rhythms. This has implications for composers and also for the way in which rhythm is taught.

In the app, there were three levels of difficulty - easy, medium and hard: 19 per cent of players (21,603 players) completed an entire performance of the piece without making a mistake at some level and 5 per cent (5,685 players) completed the game at the hardest level.

The researchers hope the findings could lead to similar large-scale game-based approaches to investigating other aspects of music psychology than rhythm and even the psychology of other artistic areas such as music and dance.