Researchers at Queen Mary University of London have discovered that cells can ‘walk’ on liquids a bit like the way geckos stick to other surfaces. 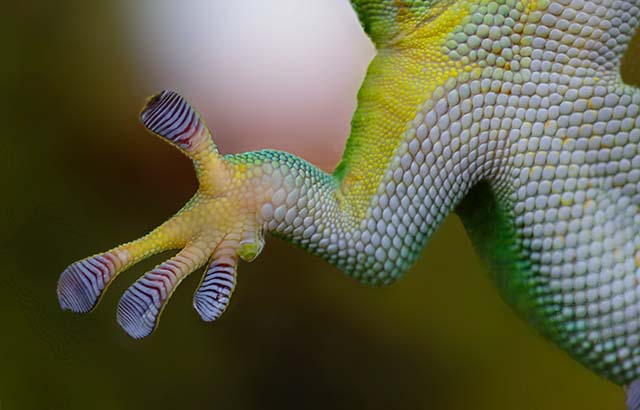 Cells are typically grown on solid materials, such as tissue culture plastic, degradable polymers and bioceramics. It is thought that the strong mechanical properties of these biomaterials are required to allow cell adhesion, an important process often controlling the behaviour of stem cells and promoting implant incorporation by surrounding tissues and tissue regeneration.

In this study, published in Nano Letters, the researchers report the successful growth of skin cells at the surface of liquid oil droplets.

This is surprising as the low viscosity of liquids is not thought to support the mechanical forces generated by cells during their adhesion.

The research team discovered that protein nanosheets, films only a few nanometres thick, assemble at the surface of such liquids and display strong mechanical properties sufficient to resist cell-generated forces.

By combining different types of mechanical characterisation methods at the nanoscale, they propose that cell adhesion to such liquids is not mediated by surface tension, as in the case of the walking of water striders, but more akin to the adhesion of geckos to a wide range of surfaces, in which shear forces play an important role.

Lead author Dr Julien Gautrot, from Queen Mary’s School of Engineering and Materials Science, said: “Understanding the mechanisms responsible for this behaviour is important as it suggests that the nanoscale properties, rather than their bulk properties, controls cell adhesion and potentially other cell behaviour. This will have important implications for the design of a new generation of biomaterials for regenerative medicine and tissue engineering.”

He added: “This means that nanoscale properties of biomaterials or tissue engineering scaffolds can be engineered independently of bulk properties to control cell behaviour and scaffold mechanics separately.”

Liquid-liquid systems, such as emulsions like a vinaigrette, are particularly advantageous to a wide range of processing and technologies. They are often used in chemical synthesis and chemical engineering where they have revolutionised industrial processes. In contrast, cell culture and stem cell technologies have not benefitted from the flexibility of liquid-liquid systems.

The team suggest the study could lead to the design of a new generation of cell technologies, for the improved production of adherent stem cells for regenerative medicine.

The study was carried out in collaboration with Umea University, Sweden.

The research was funded by the Engineering and Physical Sciences Research Council (EPSRC) and the Swedish Foundation for International Cooperation in Research and Higher Education.