Bees can count with just four nerve cells in their brains

Bees can solve seemingly clever counting tasks with very small numbers of nerve cells in their brains, according to researchers at Queen Mary University of London. 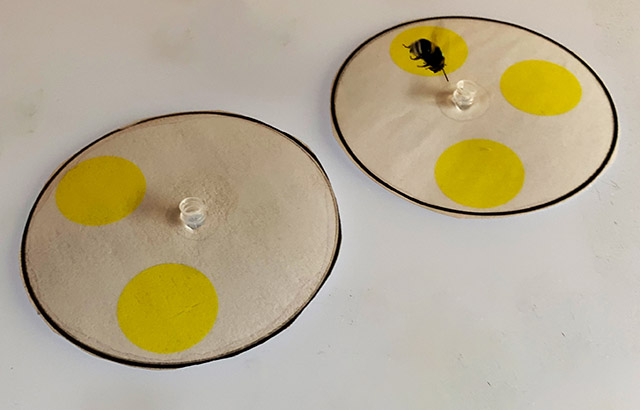 In order to understand how bees count, the researchers simulated a very simple miniature ‘brain’ on a computer with just four nerve cells – far fewer than a real bee has.

In this study, published in the journal iScience, the researchers propose that this clever behaviour makes the complex task of counting much easier, allowing bees to display impressive cognitive abilities with minimal brainpower.

Previous studies have shown bees can count up to four or five items, can choose the smaller or the larger number from a group and even choose 'zero' against other numbers when trained to choose 'less'.

They might have achieved this not by understanding numerical concepts, but by using specific flight movements to closely inspect items which then shape their visual input and simplifies the task to the point where it requires minimal brainpower.

This finding demonstrates that the intelligence of bees, and potentially other animals, can be mediated by very small nerve cells numbers, as long as these are wired together in the right way.

The study could also have implications for artificial intelligence because efficient autonomous robots will need to rely on robust, computationally inexpensive algorithms, and could benefit from employing insect-inspired scanning behaviours.

Lead author Dr Vera Vasas, from Queen Mary University of London, said: “Our model shows that even though counting is generally thought to require high intelligence and large brains, it can be easily done with the smallest of nerve cell circuits connected in the right manner. We suggest that using specific flight movements to scan targets, rather than numerical concepts, explains the bees’ ability to count. This scanning streamlines the visual input and means a task like counting requires little brainpower.

“Careful examination of the actual inspection strategies used by animals might reveal that they often employ active scanning behaviours as shortcuts to simplify complex visual pattern discrimination tasks. Hopefully, our work will inspire others to look more closely not just at what cognitive tasks animals can solve, but also at how they are solving them.”

Brain size matters a lot when it comes to bees. They have only one million nerve cells in total, so they have precious little brainpower, and must implement very efficient computational algorithms to solve tasks. In comparison, humans have 86 billion nerve cells which are responsible for receiving information and sending commands.

To model the input to the brain, the authors analysed the point of view of a bee as it flies close to the countable objects and inspects them one-by-one.

The results showed the simulated brain was able to make reliable estimates on the number of items on display when provided with the actual visual input that the bee is receiving while carrying out the task.

Professor Lars Chittka, also from Queen Mary University of London and leader of the team in which the study was performed, added: “These findings add to the growing body of work showing that seemingly intelligent behaviour does not require large brains, but can be underpinned with small neural circuits that can easily be accommodated into the microcomputer that is the insect brain."