Queen Mary University of London’s role in supporting the real Living Wage has today been named as one of the UK’s best breakthroughs for its significant impact on people’s everyday lives. 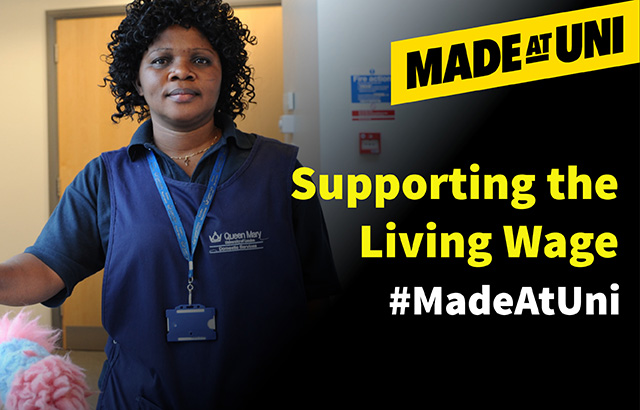 The real Living Wage is an hourly rate independently-calculated on the basis of what it costs to live and support a family, paid at £10.55 per hour in London and £9 per hour for the rest of the UK.

Queen Mary led the research which provided evidence to encourage employers to adopt the Living Wage, and was the first accredited university in the UK in 2006 to pay a real Living Wage.

The university was also a founding partner of the Living Wage Foundation, which was established to recognise the leadership of employers who choose to pay a real Living Wage based on the cost of living, not just the government minimum.

Queen Mary’s research was the first to show that the real Living Wage increases workers’ well-being, and that its implementation in London alone could save the government almost £1bn per year.

Professor Jane Wills who carried out the research at Queen Mary’s School of Geography said: “The great thing about the Living Wage is that if you put wages up, you then reduce the amount of money that the state is giving to people to top up their wages.

“It’s clear that the Living Wage can benefit everybody concerned. It’s an example of communities, campaigners and businesses coming together to find practical ways of addressing working poverty and strengthening families, and it has its roots at Queen Mary.”

‘The Living Wage has had a big effect on my family’

In addition to adopting the Living Wage, Queen Mary also introduced new working conditions for staff. Since January 2008, every staff member at the university – regardless of rank or role – has received a basic minimum package of 30 days’ annual leave, access to sick pay, an annually negotiated pay increase and an employer-contribution pension scheme.

Khalid Rouas, who works in Queen Mary’s Estates and Facilities Directorate shared his own lived experience of the Living Wage: “Prior to the Living Wage being introduced, I found it very hard to make ends meet. It was hard to find the money to pay the rent. I would have to work a lot of overtime which meant that I didn’t see much of my family.

“Earning the London Living Wage helped me considerably and had a big effect on my family and so many other families where the Living Wage is being paid.”

Queen Mary’s real Living Wage is one of 100 breakthroughs listed by Universities UK, the umbrella group for UK universities. It is part of the MadeAtUni campaign to change public perceptions of universities and bring to life the difference they make to people, lives and communities across the UK.

The list demonstrates how UK universities are at the forefront of some of the world’s most important discoveries, innovations and social initiatives. This follows independent research undertaken by Britain Thinks which found that the public has little understanding of the benefits of universities beyond undergraduate teaching.

Professor Colin Bailey, President and Principal of Queen Mary University of London, said: “It is a fantastic achievement for Queen Mary to be featured in the UK’s Best Breakthrough list. We’re extremely proud of the work of our staff and the difference they are making to people, lives and communities.

“The MadeAtUni campaign is an incredibly important initiative as it allows students, alumni, the local community and the wider population to understand the work that we do and the impact that we have.”

Professor Dame Janet Beer, President of Universities UK, said: “Universities really do transform lives. The technology we use every day, the medicines that save lives, the teachers who inspire – all come from UK universities and the important work being done by academics.

“The UK’s Best Breakthroughs list is a testament to the difference that universities make to people’s lives and we want everyone to join us in celebrating the work they do.”