Conservative Prime Minister Harold Macmillan deeply offended the widow of the deceased Labour leader Hugh Gaitskell just days after the politician’s untimely death 55 years ago. A letter in which Mrs Gaitskell describes herself as “deeply hurt” has been discovered in the National Archives and is being published for the first time. 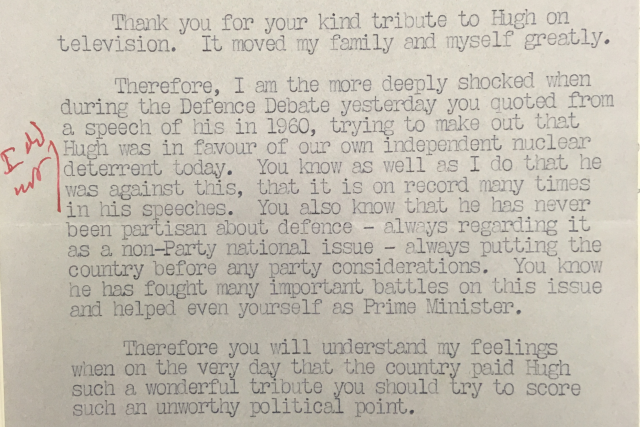 An excerpt of the letter, copyright National Archives

The document is revealed as part of an online Twitter history project, ‘@HaroldsRise’, led by academics at the Mile End Institute at Queen Mary University of London.  The account charts Harold Wilson’s rise to the Labour Leadership following the death of Hugh Gaitskell in January 1963. The project is run by Professor Philip Cowley and Matthew Bailey. The document was uncovered by Nigel Fletcher, a tutor at King’s College London, during research for his PhD thesis on the history of the Opposition in the UK.

In the letter, Dora Gaitskell describes how “deeply shocked” she was that in a debate in the Commons the previous day the then Prime Minister had misrepresented her late husband’s views on nuclear weapons, to make an “unworthy political point.” Her distress was heightened by the fact the debate took place on the very day of Hugh Gaitskell’s memorial service on 31st January, and she signs off with the words “I am most deeply hurt”.

Nigel Fletcher said: “This letter is extraordinary for the real anger it shows on the part of Mrs Gaitskell, reflecting both how important she considered her husband's stance on the nuclear issue to have been, and how deeply unwise it was for Macmillan to drag a dead opponent into a political debate on the day of his memorial."

Writing in the margin of the letter, Macmillan noted “I did not” in response to the accusation. The files show he then sought the help of the Government Chief Whip with drafting his reply, in which he tried to explain to Mrs Gaitskell the point he had been making. He then apologised for her distress, saying he “should always be sorry to say anything to wound you, particularly on that day.”