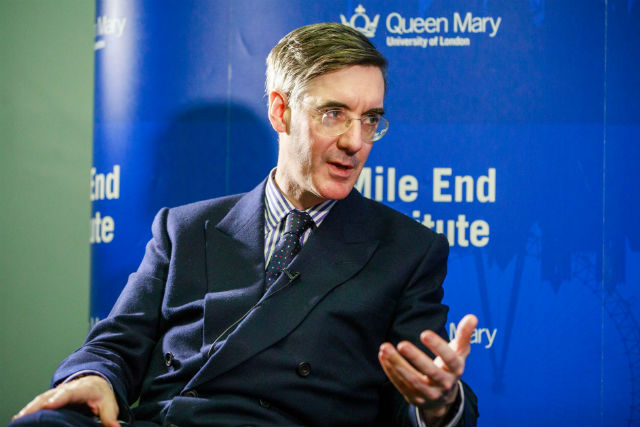 “Designed to produce a bad outcome”

Speaking in conversation with Professor Philip Cowley, Director of the Mile End Institute, Mr Rees-Mogg said that the underlying assumptions the Treasury bases its forecasts on are “designed to produce a bad outcome” for Brexit.

He explained that the various scenarios in the Treasury’s forecast assume that the UK would apply the common external tariff to its trading partners once it has left the customs union, which would be “absolutely bonkers”.

“No Government in its right mind would put higher tariffs than they already are on food, clothing and footwear. It would simply make the standard of living in this country worse”, he said.

He continued to argue that by designing the forecasts “to a particular end”, “that end would be to stay in the customs union, which basically means not leaving the European Union.”

When asked whether he thought that civil servants were deliberately producing evidence in order to skew the outcomes of these forecasts, Rees-Mogg said that the “blame always has to lie with ministers” and that the Chancellor of the Exchequer, Philip Hammond, must take responsibility for his department.

Vote of confidence for Theresa May

Mr Rees-Mogg expressed his support for Prime Minister Theresa May, stating that under no conditions would he sign a letter of no confidence. When asked whether he would take the position if it became vacant, Mr Rees-Mogg said that while he “greatly appreciate[ed] the confidence that people [were] showing” in him, he could see “no circumstances” where a non-minister would be a serious candidate.

He added that the Conservative party was in need of “invigoration” and “oomph”, and emphasised its need to “get out and about” and meet people.

He also compared Jeremy Corbyn’s 1.71 million Twitter followers with Theresa May’s 469 thousand, noting that the Tory party should improve its use of social media and move away from more traditional media.

Professor Cowley asked Mr Rees-Mogg what his message to Ukip voters would be, to which he replied that he would urge them to join the Conservative Party because it is essentially “doing the main thing that Ukip exists for”. He noted that without the “charisma” of its former leader Nigel Farage, the party has never been able to recapture the same momentum.

On the question of his “political hero”, Mr Rees-Mogg said that it was “unquestionably” Margaret Thatcher, praising her “clarity of thought, drive and energy”. He also praised the former Conservative leader for her “transformative” council housing initiative, which he said gave people a “stake in society”.

On maternity leave for parliamentarians

Mr Rees-Mogg gave his support for making the House of Commons a place where women “felt welcome and fully able” to do the job of an MP. He said he was “extremely sympathetic” to maternity leave and has “no objection” to voluntary paternity leave. He did, however, express his doubts over proxy voting: “Once you have proxy for one reason, then doesn’t it make it sensible to have it for a lot of other reasons?”

Professor Cowley also asked Mr Rees-Mogg about a number of his comments that have received media attention, including the fact that he has never been to IKEA. Mr Rees-Mogg admitted that he is “not Mr Flatpack”, but did reveal that he “quite likes” MacDonalds, has been to a Wetherspoons, and that Greggs’ cream buns were a “jolly good” Friday treat.

In Conversation at The Mile End Institute