The cholera outbreak in Yemen is overwhelmingly affecting rebel-controlled areas due to Saudi-led airstrikes and blockades, according to a letter by researchers from Queen Mary University of London (QMUL), published in The Lancet Global Health. 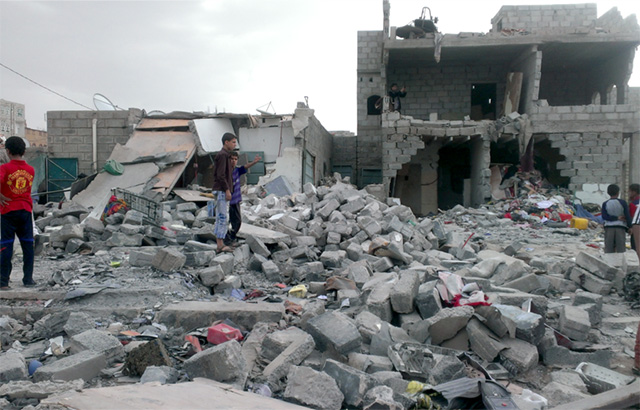 The aftermath of an airstrike in Sanaa, Yemen

Their new analysis finds that eight out of ten of Yemen’s cholera deaths occur in rebel-controlled areas.

Cholera is a bacterial infection that is spread by water that contains contaminated faeces. It can be easily prevented where people have access to clean water and sanitation, and it can be easily treated with antibiotics and oral rehydration therapy.

The researchers combined WHO’s latest cholera data with data that mapped areas of government and rebel control, and found that the cholera outbreak disproportionately affects areas controlled by Houthi rebels.

Jonathan Kennedy, Andrew Harmer and David McCoy from QMUL write: “Both sides have been accused of disregarding the wellbeing of civilians and breaching international humanitarian law. But the government and Saudi-led coalition that supports it command far greater resources. As a result, Houthi-controlled areas have been disproportionately affected by the conflict, which has created conditions conducive to the spread of cholera.

“Saudi-led airstrikes have destroyed vital infrastructure, including hospitals and public water systems, hit civilian areas, and displaced people into crowded and insanitary conditions. A Saudi-enforced blockade of imports has caused shortages of, among other things, food, medical supplies, fuel and chlorine, and restricted humanitarian access.

“As the Saudi-led coalition has played a key role in the collapse of health, water, and sanitation systems in rebel-controlled areas, it is bizarre that UNICEF recently published a press release welcoming Saudi Arabian ‘generosity’ after the Kingdom donated US$67 million to the cholera response in Yemen.”

UK and USA have played a 'crucial role' in spreading cholera

Jonathan Kennedy from QMUL added: “Saudi Arabia is an ally of the UK and USA. American and British companies supply Saudi Arabia with huge amounts of military equipment and their armed forces provide logistical support and intelligence. This backing has made the Saudi-led airstrikes and blockade possible, and therefore the UK and USA have played a crucial role in creating conditions conducive to the spread of cholera.”

In June 2017, UNICEF and WHO released a statement declaring that Yemen is “facing the worst cholera outbreak in the world”. While they acknowledged the outbreak was caused by the civil war that began in 2015, they did not suggest that one party is more responsible than another or that one side is more affected by the outbreak, stating “cholera has spread to almost every governorate”.

The new analysis is published as the UN marks World Humanitarian Day, a yearly tribute to aid workers, and aimed to rally support for people affected by crises around the world. Yemen has been described as the biggest humanitarian crisis of our time.