The story of Joseph Merrick, the so-called ‘Elephant Man’, takes centre stage in a new audio tour of Whitechapel, offering an immersive history of The Royal London Hospital and Medical College through a free smartphone app. 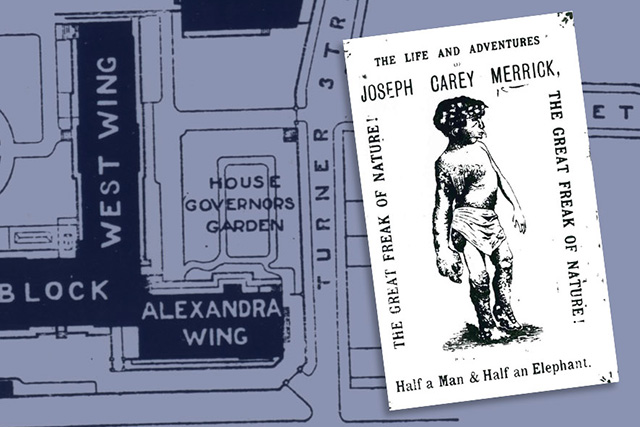 ‘I am Human’ retells the story of the hospital’s most famous resident through the eyes of Merrick himself. The audio guide has no narration, and instead brings 1880s Whitechapel to life through the voices of Merrick, the celebrity surgeon Frederick Treves, the resourceful young Matron, Eva Luckes, and a medical student training at the College.

The stories are portrayed by actors, including Samuel Barnett and Catherine Cusack, and based on historical sources such as Merrick’s autobiography and Treves’ memoirs, and medical college newsletters from hospital archives.

The main focus of the tour is the relationship between Joseph Merrick and Frederick Treves but their voices also offer insights into the work of the hospital and medical college, and life in Victorian Whitechapel.

Operating theatre at the London

Human interactions between staff and patients

Dr Nadia Valman from Queen Mary University of London (QMUL) who co-created the project said: “By the late Victorian period ‘the London’ had grown to be the largest general hospital in the country. But much was changing. There was more thought given to the human interactions among medical staff and patients. Operations, once conducted without anaesthetics before a rapt audience of students, were becoming less theatrical – and less perilous.

“Meanwhile, Londoners flocked to Whitechapel for its music halls and freak shows, but local authorities were increasingly cracking down on the public display of people with disabilities like Merrick.”

The audio guide uses the surroundings of Whitechapel – the lively market, the imposing old Hospital building, and the echoing corridors of the former Medical College -- as a dramatic backdrop for exploring different perspectives on medical care in the Victorian East End. 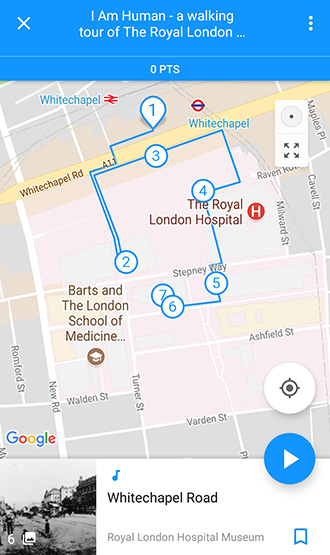 Richard Meunier, Medical School Archivist at QMUL said: “This audio tour is a unique and immersive experience which transports the listener back to a very different age. We hope that this tour will engage new audiences and enthral visitors to the hospital, medical school and local area.”

The journey ends at the Royal London Hospital museum, which contains a wealth of fascinating exhibits about Joseph Merrick, the hospital’s history and the development of healthcare in the East End.

‘I am Human’ is available as both a walking leaflet and audio guide. The audio version is accessed via the izi.Travel app which can be downloaded for free from Apple Store, Google Play or Windows Phone Store. Alternatively you can access the audio from The Royal London Hospital museum Soundcloud site.

The guide was produced as a collaborative project between Dr Nadia Valman, historian of east London at QMUL, Richard Meunier, Archivist at Barts and The London School of Medicine and Dentistry, QMUL, and audio producer Natalie Steed. The project was supported by a grant from QMUL’s Centre for Public Engagement.

Professor Peter McOwan, Vice Principal (Public Engagement and Student Enterprise) at QMUL, said: “This project focuses on the rich history of the East End while also giving new insights from our researchers. The walking tour shows how research can be made accessible in interesting ways, and is a further example of QMUL’s ongoing commitment to innovative public engagement activities. I’m sure the app will prove popular and thought provoking.”