The Gendered Aspect of Nuclear Weapons and War

Last weekend, we sponsored one of our Global Health alumni to travel and attend the Nobel Peace Prize celebrations in Oslo, Norway. In this blog post, Krishen Samuel reports from the Nobel Peace Lecture and discusses gender issues in the context of debates about nuclear war. 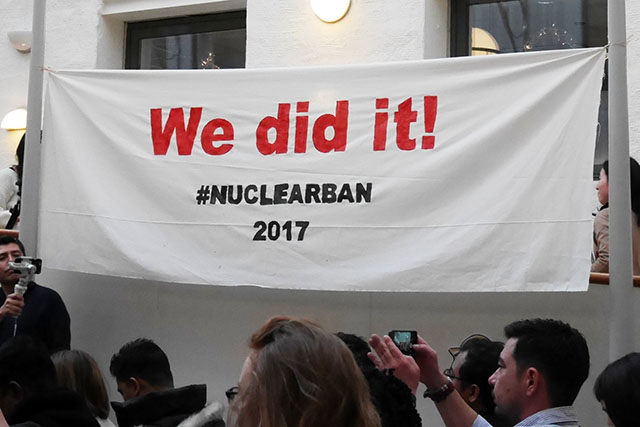 “Man—not woman—made nuclear weapons to control others, but instead we are controlled by them.” - Beatrice Fihn, Nobel Peace Lecture, 10 December 2017

Over the past weekend, I attended the Nobel Peace Prize festivities in Oslo as a representative of Barts and The London School of Medicine and Dentistry. The International Campaign to Abolish Nuclear Weapons (ICAN) was awarded the prize for its work to draw attention to the catastrophic humanitarian consequences of any use of nuclear weapons and for its ground-breaking efforts to achieve a treaty-based prohibition of such weapons.

There were numerous illuminating and inspiring moments over the course of the weekend. However, one comment made by Beatrice Fihn, executive director of ICAN, stuck with me. In her lecture, Ms Fihn chose to draw our attention to the gendered component of nuclear weapons, war and control.

This had significance on numerous levels: she was receiving the world’s most prestigious award as the female executive director of a global organisation striving towards a nuclear-free (and more peaceful) world, she was choosing to remind us of a dimension often omitted from discourses on weapons and war and she was also tapping into ‘breaking the silence’ around gendered norms—a theme that has dominated this year’s headlines.

Why is this important? It was but one aside in a speech that made so many other significant points pertaining to the prohibition and abolition of nuclear weapons, a speech that highlighted the very significant threat to humankind’s survival. However, I don’t think that it was an aside, nor do I think Ms. Fihn meant it as such. Because conversations about gender are no longer ‘asides’.

The gendered component of global acts of aggression

We are now starting to consider the gendered dimensions of all aspects of life, in all realms; we’re starting to talk about the good, the bad and the ugly (mainly the bad and the ugly and with very good reason). TIME magazine recently decided to award Person of the Year 2017 to the Silence Breakers: those brave women who have spoken out against sexual harassment, which is so often hidden it has become a silent epidemic of unimaginable proportions. With #metoo trending globally, conversations around gender have taken on broader significance weaving their way from social media platforms through to extensive news coverage and even into a Nobel Peace Lecture.

It is time to acknowledge the gendered component to both everyday acts of harassment as well as global acts of aggression. Thinking that the best defence is a good offense, developing lethal nuclear weapons to ‘protect’ a nation, and threatening to use those weapons when negotiations get heated are all typically toxic masculine modes of relating. Not only has man created nuclear weapons but he is also the most likely of the sexes to end up using them to eradicate any potential enemies. Small acts of violence become bigger acts of violence; the psychological drivers of aggression in the most intimate of settings translates into world wars played out on the global stage.

This is not to insinuate that it is only men who are capable of violence, or only male leaders who could initiate nuclear Armageddon. Instead, it is an acknowledgement that much of the violence perpetrated in the world has at its foundation qualities that we associate with masculinity: aggression, bullying, dominance over others, the use of war as a means of settling disputes, protection through attack, the idea that ‘bigger is better’ and a generalised notion that violence is acceptable and expected.

When it comes to the threat of nuclear war, these qualities have only one foreseeable conclusion: mass destruction and death.  Nuclear prohibition and abolition will never be a reality until we can recognise that there must be other ways of resolving conflict and that world peace will not be achieved by comparing the sizes of our nukes and their potential for annihilation.

Detaching ourselves from toxic notions

Another Nobel Peace Prize Laureate, a man who has dedicated his life to seeking peace through non-violent means, recently said:

“Peace is not brought about through conflict, but through compassion—creating peace of mind within ourselves. We all need compassion and women can take a lead role in encouraging others to let it flower within them. My own first teacher of kindness and compassion was my mother.” - The Dalai Lama

Beatrice Fihn has taken this lead role with ICAN. Now it is time for all of us to acknowledge the dangers of upholding masculine ideals when they no longer serve humanity as a whole. It is also time for us all to detach from the toxic notion that it is only through violence and aggression that anything meaningful can be achieved.

Moving towards a nuclear-free world will require a different set of ideals: compassion, peaceful interaction, the highest possible regard for life and a deep desire for preservation of the world not only for our generation but also for generations to come.

Krishen Samuel is a former MSc student in Global Public Health and Policy at Queen Mary University of London, with a focus on HIV prevention campaigns and activities, and currently provides teaching support for undergraduate and Masters students on the Global Health courses at Queen Mary.

Krishen is passionate about public health approaches that have a strong focus on the social determinants of health and wellbeing. He is involved in health activism with organisations such as Youth Stop AIDS and STOPAIDS and has engaged with decision makers and the public in order to create greater awareness of HIV and AIDS, both in the UK context and beyond.