Testing blood samples within the first two hours of injury could help predict which critically injured patients are more likely to develop multiple organ failure, according to an early study led by Queen Mary University of London (QMUL). 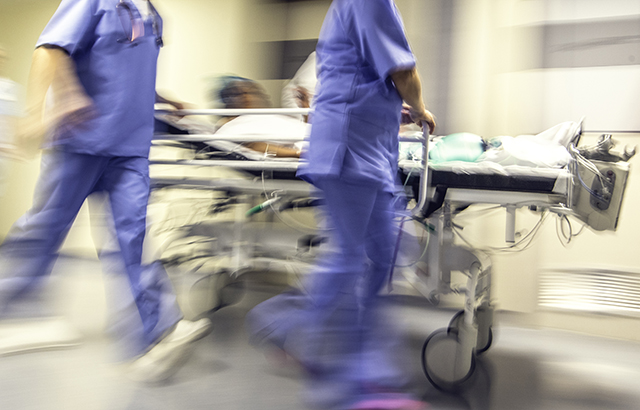 The finding that there is a specific immune response to trauma shortly after injury could also help with the development of new therapies.

The publication of the study in PLOS Medicine coincides with the launch of ‘Transform Trauma’, a national fundraising campaign to raise money for trauma research by Barts Charity.

Multiple Organ Dysfunction Syndrome (MODS) is the failure of several organs (including lung, heart, kidney and liver) which contributes to the deaths and morbidity of many critically injured patients who survive their initial physical insult. It is a poorly understood condition with no proven therapies.

Lead researcher Professor Karim Brohi from QMUL’s Centre for Trauma Sciences said: "The first minutes or hours after a traumatic injury is a key window where a patient’s immune response may set the trajectory for whether they develop organ failure."

The challenges of researching the emergency environment

Professor Brohi added: "This phase is very challenging to study due to the complexity and logistics of the emergency environment, but if we can understand the mechanisms that lead to poor outcomes, we may be able to help bring dramatic improvements through better diagnostics and therapeutics.

"Previous research into the blood clotting system, carried out immediately after injury, completely altered our understanding and changed an entire resuscitation paradigm within a decade. It is possible that overcoming the challenges of carrying out immune response research at this critical time point will do the same for our approach to organ dysfunction and protection."

The team studied blood samples from 70 critically injured patients at The Royal London Hospital, which were taken immediately on arrival in the resuscitation room (within two hours of injury). They compared these with blood samples taken at 24 hours and 72 hours after injury, and from those with minor injuries and healthy volunteers.

Out of 29,385 immune cell genes, they identified only 1,239 immune cell genes that were different between critical and control patients immediately after injury. However, by 24 hours after injury, this response had grown into a widespread immune reaction involving a ‘genomic storm’ of 6,294 genes.

Looking at the genes more closely, the team found that certain white blood cells, including ‘natural killer’ cells and ‘neutrophils’, emerged as potentially central to the immediate response to critical injury, while others, such as T-cells and B-cells, were less involved.

When comparing the immune cell genes expressed in patients who later developed MODS to those who did not, most differences were seen immediately after injury, where 363 genes had different activity levels between MODS and non-MODS patients, compared to only 33 genes after 24 hours. The researchers say it is the response of these early genes that could be used in the future to determine which patients will later develop MODS.

Further analysis of these genes during the initial two hour window found that the development of MODS was associated with biological pathways associated with cell death and survival, rather than inflammatory pathways. This is a very different finding from previous studies (based on bloods from a later time point) where excessive inflammation was thought to produce organ dysfunction.

This study is limited by its sample size and requires validation in other critically injured cohorts.

Researchers who performed the study were funded by the National Institute for Health Research (NIHR), Medical Research Council, Wellcome Trust, Department of Health, the Royal College of Surgeons and Barts Charity.