A new weakness found in medulloblastoma, the most common form of childhood brain tumour, could lead to more personalised medicine and improved treatment for some patients, according to an early study by Queen Mary University of London (QMUL). 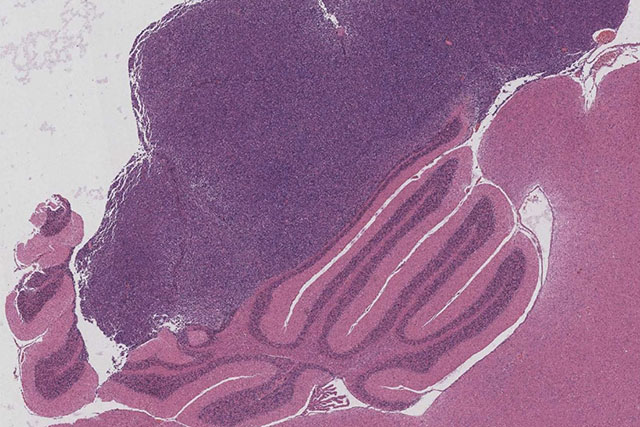 Current treatments for medulloblastoma include a combination of surgery, radiotherapy and chemotherapy which are not specific in how they target the tumour, and often lead to significant side effects, such as mental and physical disabilities.

Treatment is further complicated by the fact that medulloblastoma is not a single disease but classified into subgroups with different prognosis and survival. Little is known about the most aggressive and most common form of the disease, and better knowledge on how to identify and treat those patients could improve prognosis.

Lead researcher Professor Silvia Marino from QMUL's Blizard Institute said: “We’ve identified a new weakness in a subgroup of aggressive medulloblastomas, which potentially means that they could be susceptible to drugs which we did not know could be used to treat this type of cancer.

“Those drugs are already being tested in clinical trials for other tumours, so if we’re able to confirm their efficacy in medulloblastoma patients, they could be brought in as treatments quicker than if we would have to develop a new drug.”

Helping to identify which patients could benefit from targeted treatment

The research, which was funded by the Medical Research Council and Brain Tumour Research and published in Cell Reports, used mouse models and human cells derived from medulloblastoma tissue samples to look at the levels of two proteins, known as BMI1 and CHD7, in these tumours.

The team found that high levels of BMI1 in combination with low levels of CHD7 were associated with a poor prognosis in aggressive human medulloblastoma and that this was due to overactivation of a pathway which controls tumour growth and division.

The results mean that these two protein levels could be used as biomarkers for identifying which patients may benefit from drugs that inhibit this pathway.

The findings could also be used to develop new therapies for patients with this subgroup of medulloblastoma. BMI1 is a highly druggable molecule, so drugs could be identified that are able to inhibit BMI1, and prevent the high BMI1 levels seen in the aggressive form of the tumour.

The researchers caution that further research and clinical trials in humans will be needed before confirming these drugs’ potential.

Dr Kieran Breen, Director of Research, Brain Tumour Research, said: “Brain tumours are the largest cause of cancer deaths for those under the age of 40, yet there are still very few effective treatments available and not everybody will respond to these. We need more effective and targeted drugs. The results from this study will allow for the identification of tumour subtypes which we can target with individual agents and ultimately increase the survival rate for people with this type of tumour.”