Scientists at Queen Mary University of London (QMUL) have shown for the first time that it is possible to incorporate DNA analysis into antenatal screening for three serious chromosome disorders, including Down’s syndrome, in a way that is far more accurate, and safer and less stressful for mothers. 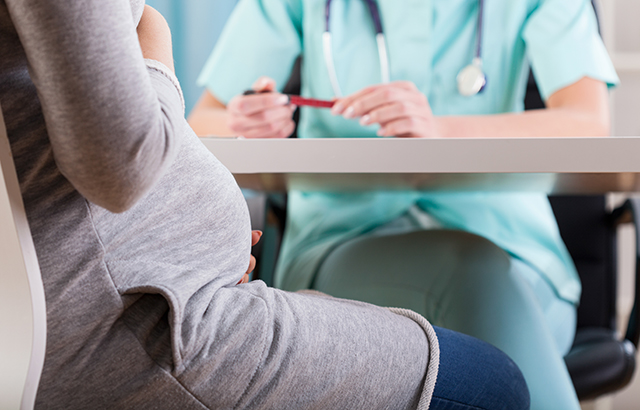 Woman in a doctors surgery

The method was implemented in five UK NHS maternity units, screening over 22,000 women between April 2015 and August 2016, and continues to be in use. The findings are published in the journal Genetics in Medicine.

Down’s syndrome is defined by the presence of an extra chromosome 21 and is the most common cause of severe learning disability. It is often associated with physical problems such as heart defects and difficulties with sight and hearing.

Edwards syndrome and Patau syndrome are also defined by the presence of extra chromosomes. Babies born with either condition typically live for around two weeks, with only 1 in 12 surviving for more than one year. The disorders can cause malformations of the heart, kidney, brain, skeleton and face.

At present, women are offered screening for these three chromosome disorders at 10-14 weeks of pregnancy. The test combines an ultrasound scan and a blood test, and if it shows that a woman is at an increased risk of having an affected pregnancy, she is offered a diagnostic test, an amniocentesis or chorionic villus sampling (CVS); these are invasive tests that involve inserting a needle through the mother’s abdomen into her womb to collect samples of fluid surrounding the foetus or tissue from the placenta.

With the new method, women provided a blood sample at about 11 weeks of pregnancy. The sample was divided into two; one used for the conventional screening test and one held in reserve. The first sample was used to assess the women’s risk of any of the three disorders. If, on the basis of that test, the risk of having an affected pregnancy was 1 in 800 or a higher risk, the other blood sample was automatically retrieved for a DNA test (i.e. performed in a “reflex” manner), without having to recall the women to provide a fresh blood sample. This avoided needlessly worrying the women by informing them that the DNA test was required because of their increased risk of an affected pregnancy.

Of the 22,812 women screened, 11 per cent had a reflex DNA test. It detected 101 out of the 106 pregnancies affected with one of the three disorders, with only four false-positives, yielding a 95 per cent detection rate (compared with 81 per cent using the existing conventional test alone), and a 0.02 per cent false-positive rate (100-fold reduction in false positives from 2.42 per cent for the combined test). Among pregnancies that tested positive and where the women were offered an invasive diagnostic test, 25 out of 26 were affected by one of the syndromes.

Professor Sir Nicholas Wald, from QMUL’s Wolfson Institute of Preventive Medicine, who led the project, said: “The reflex DNA approach has substantial benefits to the well-being of the women screened. Not only are more affected pregnancies identified, but many fewer women will be made acutely anxious by being notified that they have a positive screening result, and among those women with a positive DNA screening result, almost all will have an affected pregnancy. Reflex screening is also safer than conventional screening as it avoids nearly all invasive diagnostic tests in unaffected pregnancies and miscarriages related to these procedures.

“The reflex DNA approach has beneficial resource implications by reducing the number of women who need counselling on account of a positive screening result, and by avoiding about five out of six diagnostic amniocenteses that would otherwise be indicated. The extra costs of the DNA tests are offset against savings from fewer amniocenteses and associated counselling. The overall balance of costs and savings can be chosen by adjusting the proportion of women who have a reflex DNA test.”

He continued: “The National Screening Committee is considering a similar proposal, which involves recalling women with a positive initial result for a DNA test, some of whom will be sufficiently anxious to request a diagnostic amniocentesis rather than the DNA test. The reflex method avoids causing worry to this group, and avoids the dilemma in choosing between a DNA screening test and a diagnostic amniocentesis.”

Consultants have more time to devote to other clinical needs

Mr Joseph Aquilina, consultant obstetrician at Barts Health NHS Trust who participated in the project, said: “The new reflex DNA approach is transformational. Not only is the screening method better than current practice, but I have more time to devote to other clinical needs, as do the nursing and midwifery staff involved.”

The researchers are now approaching other hospitals in the UK to see if they would be interested in adopting the new test. In addition, they say that the test could be adopted by hospitals worldwide so long as they have access to labs that can perform the DNA analysis. “Ideally, the DNA testing would be performed in the existing screening laboratory in order for the testing process to be seamless,” said Professor Wald.