Poor asthma control and knowledge are common in children with doctor-diagnosed asthma, according to research by Queen Mary University of London (QMUL). 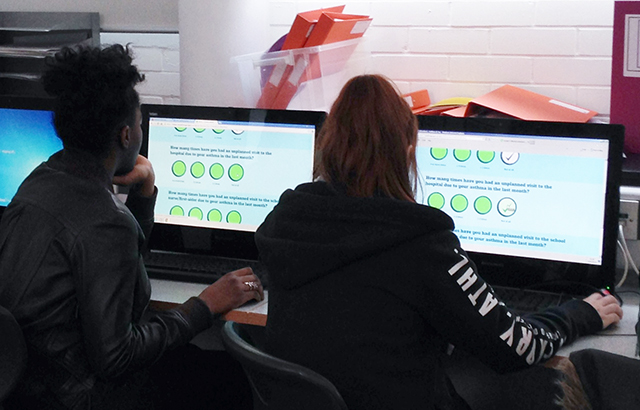 The researchers say the results should prompt more intense clinical monitoring, and suggest a need for interventions aimed at addressing poor asthma control in UK schoolchildren.

The UK has among the highest prevalence rates of asthma symptoms in children worldwide, with 932,000 asthmatic children in England alone. On average there are three children with asthma in every classroom in the UK, and a child is admitted to hospital every 20 minutes because of an asthma attack.

Children with doctor-diagnosed asthma were invited to complete an online questionnaire about their asthma. A total of 799 children in 24 schools completed the questionnaire and 689 were included for analysis.

The study, published in the Journal of Asthma, found that suboptimal asthma control was reported by 49.6 per cent of the students. Over a third (42.4 per cent) of students prescribed a short-acting ‘β2-agonist’ inhaler felt uncomfortable using it at school, and 29.2 per cent reported not using this inhaler when wheezy.

56.4 per cent of those with regular inhaled corticosteroids did not take them as prescribed, and 41.7 per cent did not know what this inhaler was for.

Corresponding study author Katherine Harris from QMUL’s Blizard Institute said: “This study is the first to measure asthma control in UK schools, and highlights an under-reporting of asthmatics in schools, as well as high rates of poor asthma control. These findings will inform the development of a school-based intervention, aimed at improving adherence to medication, knowledge and control.”

Professor Jonathan Grigg from QMUL’s Blizard Institute added: “The aim of inhaled therapy of asthma in children is to completely suppress symptoms, but we found that many children with regular asthma symptoms did not realise what good control should feel like.

“The UK has a disproportionally high death rate from childhood asthma compared with continental Europe. Since poor control increases the risk of severe asthma episodes, our schools-based study showing high levels of poor asthma control suggests one reason for this high death rate."

The study was funded by a grant from the North Thames Collaboration for Leadership in Applied Health Research and Care (CLAHRC).