Why abseiling spiders don’t spin out of control – new research

Seeing an abseiling spider descend gracefully using its dragline silk instead of spinning unpredictably and uncontrollably is a magnificent sight. Professor David J Dunstan and Dr Dabiao Liu write for The Conversation, and try to understand the science behind it. 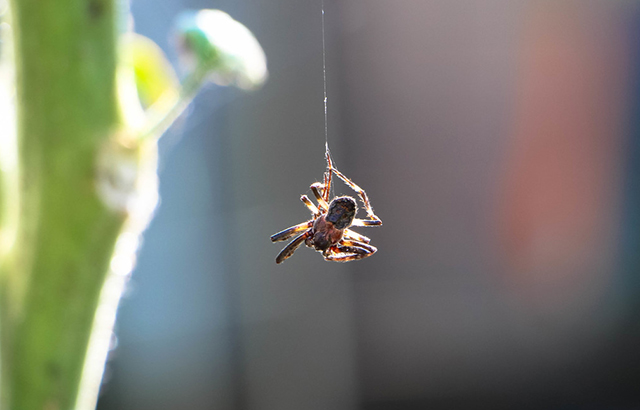 Spiders use dragline silk for the outer rim and spokes of spider webs, as well as using it as a lifeline when dropping to the ground. This is the strongest of the silks produced by spiders, as it must support their entire weight. It is known to have extraordinary properties, and is stronger than steel by weight. Spiders manufacture it at room temperature from simple sustainable materials so that it has no detrimental environmental impact.

But spiders dangling from a dragline silk are also rotationally stable, which is very different to loads suspended from a single, manmade rope – whether a natural rope like hemp, or a steel cable.

Torsion, or the act of twisting, is known as the most sensitive way to study the mechanical properties of materials. Henry Cavendish used a torsion pendulum in the 1700s to detect the gravitational attraction between metal balls in the laboratory. His experiment was known as “weighing the Earth”, because it measured Newton’s universal gravitational constant “G”. Charles-Augustin de Coulomb also used it to establish his law of electrostatic attraction.

Our research, initiated at Huazhong University of Science and Technology (HUST) and now continuing at Queen Mary University of London, developed an improved torsion pendulum based on image processing. By using this method, the back and forth oscillations of the pendulum can be recorded, and the twist angles can be found by analysing the image. We used this improved method to look at the how spider silk responds to torsion.

We collected dragline silks from two species of golden silk orb weavers, Nephila edulis and Nephila pilipes, raised in the lab. We hung the dragline silk inside a cylinder – using two washers at the end to mimic the weight of a spider. We twisted the strands using a rotating turntable and released them, and recorded the oscillations with a video camera.

When Kevlar fibre, metal wires, and other conventional fibres are given a twist and released, they spin or oscillate around their initial resting point, this can be seen in the video above. What was staggering and unusual about spider silk, was that, for all initial twists, the silk oscillated around a position that was different from its original resting point.

That means that the silk is “yielding” when it is first deformed. All materials – rubber, steel, and stone, modelling clay – deform under load, but at first spring back to their initial shape when the load is removed. This is called elasticity. At higher loads, very small for modelling clay and very high for steel, they yield or give, and remain permanently deformed. This is plasticity. The spider silk is both partially plastic and partially elastic right from the very first small deformation. No normal material behaves in this way, and it is very hard to explain how a material can do so.

The yielding dissipates the majority of the energy stored in the twist and in doing so reduces the size of the oscillations following it. Otherwise these oscillations would send a spider spinning on the bottom of its silk. The remaining energy could be dissipated by air resistance, or by friction in the molecular structure of the silk but we are not sure yet. For other conventional fibres, the oscillations die away mainly due to air resistance.

On a molecular level

A dragline silk is composed of lots of tiny “fibrils”, and each fibril contains proteins that form a combination of “amorphous chains” and “crystalline sheets”.

Amorphous chains are loosely linked together with hydrogen bonds, and have no rigid shape. Crystalline sheets on the other hands, have a very defined structure.

We speculated that, under torsion, the amorphous chains, which are held together by weaker bonds, can be easily deformed. That deformation, together with friction between fibrils, can quickly dissipate the energy applied. Meanwhile, the crystalline sheets can recover their original shapes after being deformed, so they maintain the shape of the silk.

A better understanding of how dragline silk resists spinning may eventually lead to the development of biomimetic fibres with the same properties. This would lend itself to improvements in a huge range of areas, like helicopter rescue ladders and parachute cords. Much work remains to be done, but the secrets of spider silk are beginning to be unravel