Trophy hunting may cause extinction in a changing environment

Trophy hunting and other activities involving the targeting of high-quality male animals could lead to the extinction of certain species faced with changing environmental conditions, according to new research from Queen Mary University of London (QMUL). 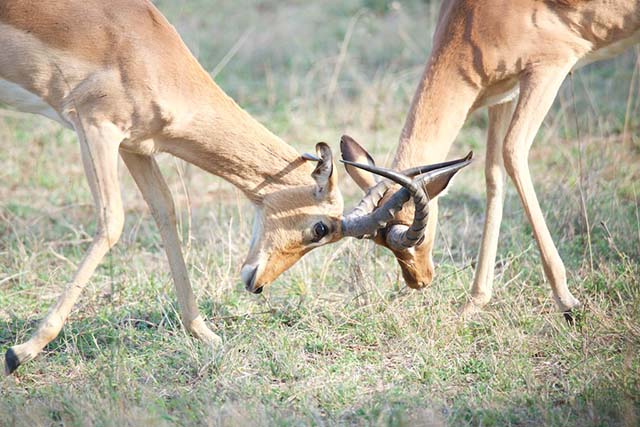 These well-ornamented individuals tend to be the most evolutionarily fit so if they are removed then the best genes are taken out of the population. The researchers predict that in some circumstances, when an animal population is faced with a changing environment, harvesting rates of as low as five per cent of these high quality males can cause extinction.

The study was published in Proceedings of the Royal Society B: Biological Sciences.

Lead author Dr Rob Knell, from QMUL’s School of Biological and Chemical Sciences, said: “This demonstration that trophy hunting can potentially push otherwise resilient populations to extinction when the environment changes is concerning. Because these high-quality males with large secondary sexual traits tend to father a high proportion of the offspring, their ‘good genes’ can spread rapidly, so populations of strongly sexually selected animals can adapt quickly to new environments. Removing these males reverses this effect and could have serious and unintended consequences.

“We found that ‘selective harvest’ has little effect when the environment is relatively constant, but environmental change is now a dangerous reality across the globe for considerable numbers of species.”

A force for conservation

Trophy hunting is an important industry - a greater land area of Sub-Saharan Africa is conserved for hunting than is protected in national parks - and it is thought to have little effect on well-managed harvested populations because off-take rates are low and usually only the males are targeted.

Using a computer simulation model, however, the researchers were able to predict the impact of selectively targeting males on the basis of their secondary sexual traits and how the environment affects this.

In addition to the careful reactive management of harvested populations, they suggest removing only older males which have already had an opportunity to reproduce.

Dr Knell said: “Our results clearly show that age restrictions on harvest which allow males to breed before they are taken is effective at reducing the impact of selective harvest on adapting populations.

“When properly regulated trophy hunting can be a powerful force for conservation which is why we’re suggesting a different management approach as opposed to calling for a ban.”

Trophy hunters and insect collectors are not the only people targeting males on the basis of their secondary sexual ornaments. Many animal populations harvested for food are managed by only allowing the harvest of males and in at least some of these, such as certain crab populations, males with big secondary sexual traits are targeted.

Furthermore, elephant tusks function partly as secondary sexual traits and poachers will specifically target elephants based on tusk size. This research suggests that these populations might be at more risk than was previously thought.