Radar tracking reveals how bees develop a route between flowers

As bees gain foraging experience they continually refine both the order in which they visit flowers and the flight paths they take between flowers to generate better and better routes, according to researchers at Queen Mary University of London. 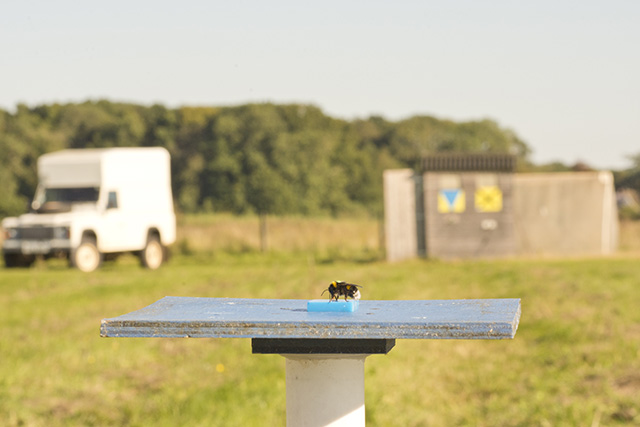 A bumblebee eats a food reward presented on an artificial flower. Five such feeders each contain 1/5 of the amount required to fill her up and the bee must learn a route to take her to all five. Visible in the background are a Landrover from which researchers monitor the harmonic radar and a shed which contains the bee’s nest. Copyright: Joseph Woodgate.

Despite this, bees can be tricked into taking tempting shortcuts between flowers even at the cost of increasing the overall distance they have to fly.

Animals that travel between multiple destinations and return to a home base – like bees, birds, primates and humans - face a predicament known to mathematicians as the Travelling Salesman Problem.

The challenge is to find a route that visits each destination while travelling the shortest possible distance. Previous research, looking only at the order in which animals arrive at each destination, has shown that animals often find a good, or even optimal, solution but little is known about how they find that solution.

Lead author Joseph Woodgate, from Queen Mary’s School of Biological and Chemical Sciences, said: “Animals cannot simply inspect a map to find out where the best food sources are or plan how to get between them.”

Bumblebees start out knowing nothing about the terrain or where they can find food, so they must explore the landscape, discovering locations one by one and then face the challenge of integrating their spatial memories into an efficient route.

“Only by monitoring every move they make as they explore and try to generate a better route, can we understand how they tackle this challenge”, Dr Woodgate added.

The researchers allowed bumblebee foragers to feed on an array of artificial flowers and used harmonic radar technology to follow individuals continuously over every foraging trip they made as they gradually developed solutions to the problem of how to visit them all.

The result was one of the largest and most complete datasets on bee flight ever recorded and provided an in-depth look at route development for the first time ever. They found that focussing simply on sequences of visits to feeder stations, rather than the actual movements between stations or the way that routes develop, is insufficient to understand how animals solve route optimisation problems.

The study, conducted in collaboration with Rothamsted Research, was published in Scientific Reports.

Professor Lars Chittka, coordinator of the study, said: "Imagine a salesman from London who needs to call at Manchester, Leeds, Glasgow, Edinburgh and Inverness before returning home. From Manchester it is tempting to make the short trip across to Leeds, and from Glasgow it is tempting to visit Edinburgh, but a salesman who does that will soon find themselves stranded in Inverness with a very long drive home. The better solution is to travel up one side of the UK and return down the other.”

The researchers presented the bees with an equivalent challenge.

Dr Woodgate said: “As predicted, our bees showed a strong preference for taking shortcuts between nearby pairs of feeders even though this meant flying further in the long run. However, they did not exclusively fly only to the closest possible feeders, and tried out different routes in a flexible way.”

The tracks recorded by the harmonic radar could be used to visualise the routes taken by the bees as they foraged. The researchers developed animated heatmaps that graphically demonstrated how some segments of route became habitual while other explorations were forgotten as preferred flight paths were discovered.

The flight distance and duration of foraging bouts reduced as bees gained experience and this increased efficiency was attributable mainly to experienced bees flying straighter and exploring less, rather than improvements in the order in which flowers were visited.

However, the bees never became completely set in their ways and the researchers uncovered evidence that suggests that they use random processes to introduce some variation into their routes which may help them to try out different visit orders looking for improvements to their routes.

The results also reveal that efficient routes develop by parallel improvements of both the order feeders were visited and the actual movements of bees flying between them. In other words, experienced bees not only visited their feeders in the same order, but also flew along the same flight lines time after time. These habitual flight paths were straighter than the routes they flew when first discovering the feeders, allowing them to reduce their travel distance even when they were unable to visit them in the best possible order.

“It’s also important to understand how bees and other pollinating insects search for food and use the landscape is crucial to managing the risks to pollinator services posed by habitat loss and agricultural intensification.”