A group of Queen Mary University of London (QMUL) students won a Europe-wide tech clash with their idea to create a collaborative virtual reality platform for education. 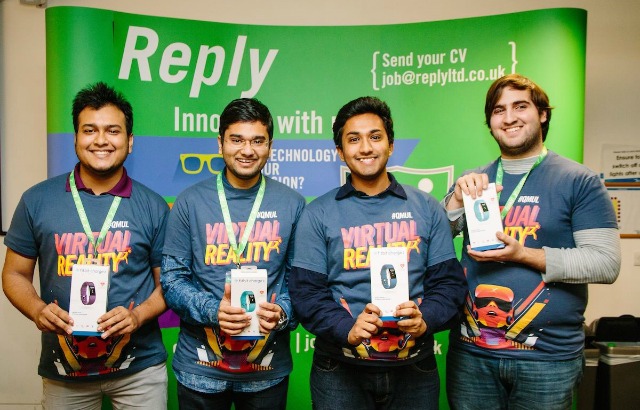 They presented their proposal at the eighth edition of Student Tech Clash, organised by the Reply network, which offered students the opportunity to try out virtual reality technology and work for one day on generating feasible, innovative and technologically relevant business ideas.

The team of four suggested creating an open platform where universities and industries could collaborate to bring virtual reality experiences to students. This could allow them to experience things that are dangerous or not possible such as recreating historical events, experimenting with explosives and visiting volcanoes.

They were announced as the winning team at the QMUL event on November 4. It was then revealed on November 11 that they had also won the overall prize in the competition, beating three other European universities: FAU Erlangen in Nuremberg, Politecnico in Milan and Politecnico in Turin.

Adnan Salehin, a member of the team and first-year student studying for a Computer Science BSc, said: “We were ecstatic when we were announced as the winners between all the QMUL teams. I can’t speak for the other members of the team, but I was shocked by the results published on November 11. We were declared as the winners at European Level as well as ‘The Best European Case Study’. Our idea turned out to be the best one among all the teams in all of the participating universities.”

Adnan added: “The main idea was to use virtual reality and augmented reality in education to achieve things that are not actually possible or pose safety issues to students, while also offering a hands-on experience without any risk to make studying more interesting and fun while being more informative at the same time.

“I am glad I had the opportunity to represent QMUL in the competition and was able to emerge triumphant both locally and internationally.”

But for Adnan, taking part required a stroke of luck as he only filled the place of someone in the team after they dropped out at the last minute.

Thanks to the team’s success QMUL will now receive one HTC Vive VR headset from Reply as a reward while the four members were awarded with a Fitbit Charge 2 each.

Reply is made up of a network of highly specialised companies, which support leading industrial groups in defining and developing business models to optimise and integrate processes, applications and devices.