The astronomers who discovered the nearest potentially habitable planet to our Solar System are inviting the public to take part in their search for more Earth-like planets. 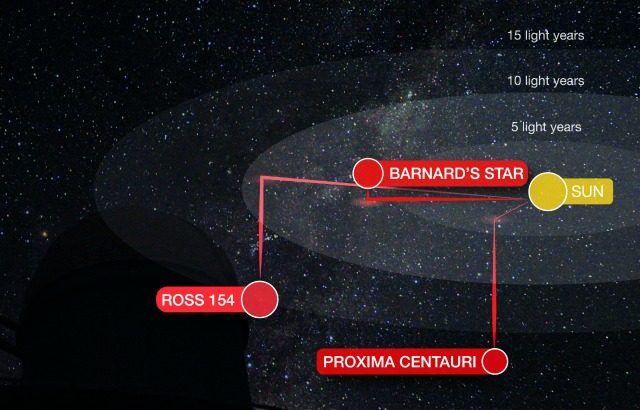 Last year an international team of astronomers led by Dr Guillem Anglada-Escudé, of Queen Mary University of London (QMUL), discovered a planet around the closest star to our Sun, Proxima Centauri. Details of the observing campaign were made publicly available via the innovative Pale Red Dot campaign.

The team [1] are now resuming their search for Earth-like planets around nearby stars and are today launching another initiative to bring the public into direct touch with the research as it happens.

The Red Dots campaign will follow the astronomers as they look for planets around some of our nearest stellar neighbours. The target stars this time are Proxima Centauri (which the scientists suspect may have at least one more terrestrial planet in orbit around it), Barnard's Star, a red dwarf star just six light-years away and Ross 154, another red dwarf at a distance of nearly 10 light-years.

Dr Guillem Anglada-Escudé said: “Exploration of the nearest stars for terrestrial planets is intrinsically exciting. We want to capitalise on that to expose the way we work in science, to show the difference between data and interpretation, and to invite people to participate in the painful process of learning something new over the course of nearly 100 days of data collection. We also expect to get feedback and the help of inquisitive minds attempting innovative approaches. This is also an experiment after all. We'll see what happens!”

The team will acquire and analyse data from the High Accuracy Radial velocity Planet Searcher (HARPS) [2] instrument on the European Southern Observatory’s 3.6-metre telescope in Chile and other instruments across the globe [3] over approximately 90 nights. Photometric observations began on 15 June and spectrographic observations start on 21 June. The Red Dots initiative — presenting real science in real time — will give the public and the scientific community direct access to the observational data from at least Proxima Centauri as the campaign unfolds [4].

Conversations with the scientists will be encouraged via a forum where more scientific and technical details can be shared. In addition to this, the team will welcome contributions from professional and amateur astronomers to assist in the photometric follow up of all three targets in collaboration with the American Association of Variable Star Observers.

The Red Dots campaign will keep the public informed via the reddots.space website and forum where weekly updates will be posted, together with supporting articles and featuring the highlights of the week from the community. Conversations will take place also on the Red Dots Facebook page, the Red Dots Twitter account and via the hashtag #reddots.

Funding for the campaign was partly provided by the Science and Technology Facilities Council (STFC).

[2] HARPS is a spectrograph with unrivalled precision — the most successful finder of low-mass exoplanets to date. Attached to the ESO 3.6-metre telescope at La Silla, HARPS searches nightly for exoplanets, looking for the minute wobbles in the star’s motion, generated by the pull of an exoplanet in orbit. HARPS picks up motions which can be as little as a gentle walking pace — just 3.5 km/h — from trillions of kilometres away.

[3] In addition to the HARPS instrument, the Red Dots campaign will use an extensive network of small telescopes for photometric monitoring including: Las Cumbres Global Observatory Telescope network; SpaceObs ASH2 in Chile; Observatorio de Sierra Nevada, in Spain; and Observatori Astronomic del Montsec, Spain. Alongside the new data, the team will make extensive use of public observations of all three stars from the ESO archives (HARPS and UVES/VLT) and the ASAS photometric survey.

[4] The Pale Red Dot campaign revealed the methods and steps of doing science, but the results were presented only after the peer review process. This time, observational data and discussions about what Proxima Centauri might be revealing will be presented in real time.

The outreach campaign is being coordinated by members of the science team with support from the outreach departments of ESO, Queen Mary University of London, Instituto de Astrofisica de Andalucia/CSIC, Universidad de Chile and University of Goettingen.

No one can say for sure what the outcome of the Red Dots campaign will be. Any observations presented during this time will of course be preliminary only and they must not be used or cited in refereed literature. The team will not produce conclusive statements, nor claim any finding until a suitable paper is written, reviewed and accepted for publication in a scientific journal. The purpose of the campaign is to open the scientific process to public view, but not circumvent the peer review process.