A lot of excitement surrounded Proxima b when it was discovered – a potentially habitable exoplanet around our nearest neighbour star, Proxima Centauri. Located a mere 4.24 light years away, Dr Martin Archer discusses in The Conversation how we can explore this new planet 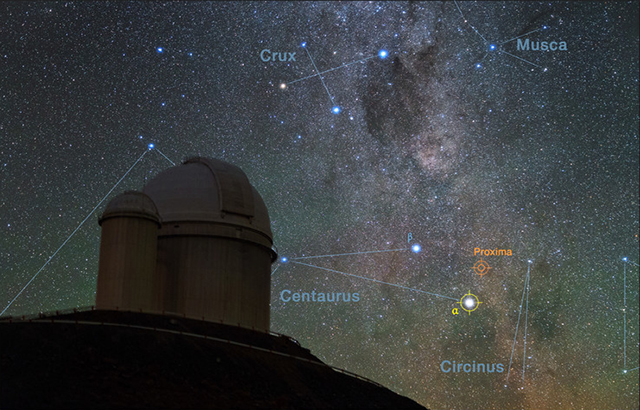 A view of the southern skies with images of the stars Proxima Centauri (lower-right) and the double star Alpha Centauri AB (lower-left) from the NASA/ESA Hubble Space Telescope. Y. Beletsky (LCO)/ESO/ESA/NASA/M. Zamani

While a lot of work has been done to try to figure out what this world might be like, the follow up campaign of observations is only now getting under way. Excitingly, you can be a part of it.

The original discovery of Proxima b in 2016 came from a campaign led by my colleagues, called Pale Red Dot. This used the High Accuracy Radial velocity Planet Searcher (HARPS), an instrument on the European Southern Observatory’s 3.6-metre La Silla telescope, for 60 days in early 2016. This measured the “spectrum” of light (the breakdown of light by colour or equivalently frequency) emitted from Proxima Centauri, allowing astronomers to look for small changes in the frequencies of its features due to the star’s motion. An oscillation in that star’s motion can reveal the gravitational tug of an orbiting planet on its star.

The new campaign, called Red Dots, will take 90 more days of data from Proxima Centauri and two other nearby stars: Barnard’s Star and Ross 154. By gathering more data the team hope to find out more about Proxima b, greatly improving the accuracy of our measurements so far. While we know it lies in the star’s habitable zone, where liquid water could be present on the planet’s surface (and hence life could exist), we don’t know very much about the shape of the planet’s orbit, for instance.

All we can say at the moment is that it could be anywhere between being perfectly circular to as elliptical as Pluto’s journey around the sun. This small detail may have great consequences for whether the planet is “tidally locked” to the star – meaning one side always facing the star in perpetual day and the other in unending darkness. This obviously has a huge impact on surface temperatures. These details will be especially important if there is an atmosphere and oceans. However, it will take space telescopes, such as the planned James Webb Space Telescope, or much larger ground-based telescopes, like the upcoming instruments on the Very Large Telescope, to answer these questions with actual observations.

The new campaign may also find brother or sister planets to Proxima b. This isn’t just a pipe dream, the data collected so far shows some evidence towards at least another planet possibly being present. Indeed, the calculations suggest we can’t rule out several additional Earth-like planets or planets that are similar to Earth but bigger, as these wouldn’t destabilise Proxima b’s orbit.

Any cousins to Proxima b around the other two stars being observed will really push our ability to detect exoplanets around such small, dim and variable stars known as red dwarfs. Barnard’s Star rotates very rapidly, about once every three days, and Ross 154 is much more active than Proxima Centauri. Both of these features will add to the complications of correctly identifying planets as there will be many spurious effects which could show up in the data.

So where do you come in? Well there are two ways you can get involved. All the data is being made available almost as soon as it comes in – so there’s the opportunity for you to try and answer some of these outstanding questions yourself. Using the toolkits provided, you can search for signals in the data corresponding to potential planets and make fits to find out their properties. Alternatively, if you operate your own telescope there’s a chance to contribute your own Proxima Centauri data throughout the campaign by proposing and taking measurements of the star and uploading them to the Red Dots website.

But if those sound like a bit too much effort, Red Dots will simply allow you to see the science as it happens rather than just hearing about the results at the end. Given the excitement that I got to witness behind the scenes throughout the Pale Red Dot campaign, I think it’s great that you can be a part of this new one.