School pupils from across London presented their cutting-edge physics research at a conference hosted by Queen Mary University of London (QMUL). 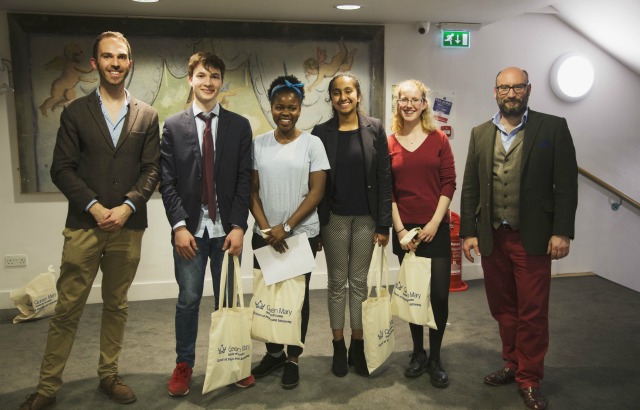 ‘Cosmic Con’ was the culmination of months of work from the schools which undertook projects on planet hunting, detecting cosmic rays and analysing sounds recorded in space by satellites.

The schools were introduced to the research by QMUL’s Research in Schools programme which set students up to work on projects and allowed them to design and conduct their own studies in small groups. The results were then presented at the People’s Palace on March 29.

Dr Martin Archer, Outreach Officer at QMUL’s School of Physics and Astronomy, said: “These Research in Schools projects are raising aspirations among students in local schools. The projects allow students to practice authentic scientific research methods and techniques which otherwise would not be accessible to them. Cosmic Con is a great celebration of the dedication, enthusiasm and hard work the students have put into them.”

The winners of the top research groups included:

Planet Hunting with Python has seen students learning how to program in the Python coding language and find exoplanets - planets orbiting stars other than the Sun. Pupils presented the properties of the exoplanets they had managed to discover by applying their code to data from the Kepler space telescope.

The cosmic ray project allowed pupils to use technology similar to current neutrino experiments like Super Kamiokande and featured results on the directions that muons travel in. Muons are the heavier cousins of electrons which are created when cosmic rays hit the top of our atmosphere and can reach the ground. The project also demonstrated how measurements of the decay of these unstable particles can tell us about fundamental particle interactions such as the Weak Nuclear Force and the Higgs interaction.

The MUSICS (Magnetospheric Undulations Sonified Incorporating Citizen Scientists) saw students listening to and analysing sounds in space recorded by satellites. The process of listening to sounds, rather than using a computer to analyse them, has picked out a number of significant wave events that occurred in the space around Earth. This is of importance since these waves play a role in space weather and can affect our technology.

Funding for two of the muon detectors used in the project was provided by The Science and Technology Facilities Council (STFC) through a Public Engagement Small Award.