Dust detected around the closest star to the solar system, Proxima Centauri, may indicate the presence of an elaborate planetary system. 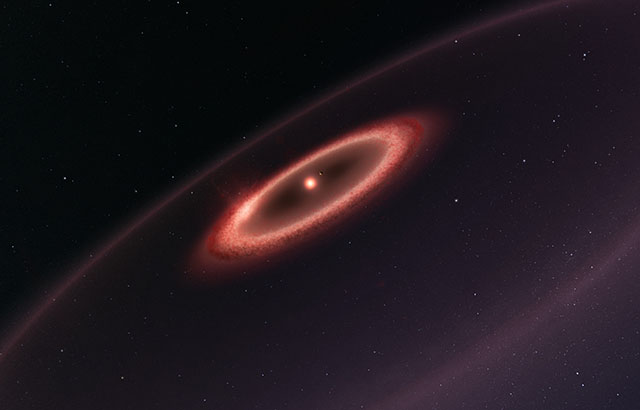 The observations, presented in Astrophysical Journal Letters, were made at The ALMA Observatory in Chile by researchers from the Instituto de Astrofísica de Andalucía (CSIC) and Queen Mary University of London (QMUL).

The new observations reveal the glow coming from cold dust in a region between one to four times as far from Proxima Centauri as the Earth is from the Sun.

The data also hint at the presence of an even cooler outer dust belt. These structures are similar to the much larger belts in the Solar System and are also expected to be made from particles of rock and ice that failed to form planets.

Proxima Centauri is the closest star to the Sun. It is a faint red dwarf lying just four light-years away in the southern constellation of Centaurus (The Centaur). It is orbited by the Earth-sized temperate world Proxima b, discovered in 2016 and the closest planet to the Solar System.

Co-author of the study Guillem-Anglada-Escudé [1], from QMUL, said: “The cold dust detected by ALMA is really important because it shows the new level of detail that we can reach in understanding planetary systems when focusing on these very nearby stars with new generation observatories.

“These observations show that Proxima Centauri seems to hold a rich planetary system with an interesting dynamical history rather than just Proxima b, which we discovered last year.”

What are dust belts?

Dust belts are the remains of material that did not form into larger bodies such as planets. The particles of rock and ice in these belts vary in size from the tiniest dust grain, smaller than a millimetre across, up to asteroid-like bodies many kilometres in diameter [2].

Dust appears to lie in a belt located at a few hundred million kilometres from Proxima Centauri and has a total mass of about one hundredth of the Earth’s mass. This belt is estimated to have a temperature of about –230 degrees Celsius, as cold as that of the Kuiper Belt in the outer Solar System.

There are also hints in the ALMA data of another belt of even colder dust about ten times further out. If confirmed, the nature of an outer belt is intriguing, given its very cold environment far from a star that is cooler and fainter than the Sun. Both belts are much further from Proxima Centauri than the planet Proxima b, which orbits at just four million kilometres from its parent star [3].

Lead author of the study Guillem Anglada, from (CSIC), Granada, Spain, explains the implications of the discovery: “This result suggests that Proxima Centauri may have a multiple planet system with a rich history of interactions that resulted in the formation of a dust belt. Further study may also provide information that might point to the locations of as yet unidentified additional planets.”

Proxima Centauri's planetary system is also particularly interesting because there are plans — the Starshot project — for future direct exploration of the system with microprobes attached to laser-driven sails. Knowledge of the dust environment around the star is essential for planning such a mission.

Co-author Pedro Amado, also from the Instituto de Astrofísica de Andalucía, explains that this observation is just the start: “These first results show that ALMA can detect dust structures orbiting around Proxima. Further observations will give us a more detailed picture of Proxima's planetary system. In combination with the study of protoplanetary discs around young stars, many of the details of the processes that led to the formation of the Earth and the Solar System about 4600 million years ago will be unveiled. What we are seeing now is just the appetiser compared to what is coming!”

[1] In a cosmic coincidence, Guillem Anglada-Escudé, the astronomer who led the team that discovered Proxima Centauri b, shares his name with the lead author of the study in which this research is published, although the two are not related.

[2] Proxima Centauri is quite an old star, of similar age to the Solar System. The dusty belts around it are probably similar to the residual dust in the Kuiper Belt and the asteroid belt in the Solar System and the dust that creates the Zodiacal Light. The spectacular discs that ALMA has imaged around much younger stars, such as HL Tauri, contain much more material that is in the process of forming planets.

[3] The apparent shape of the very faint outer belt, if confirmed, would give astronomers a way to estimate the inclination of the Proxima Centauri planetary system. It would appear elliptical due to the tilt of what is assumed to be in reality a circular ring. This would in turn allow a better determination of the mass of the Proxima b planet, which is currently known only as a lower limit.