From virtual building blocks to robotic lawyers, Minecrafting the Law is a novel way children and young people to explore the complexities of our legal system. 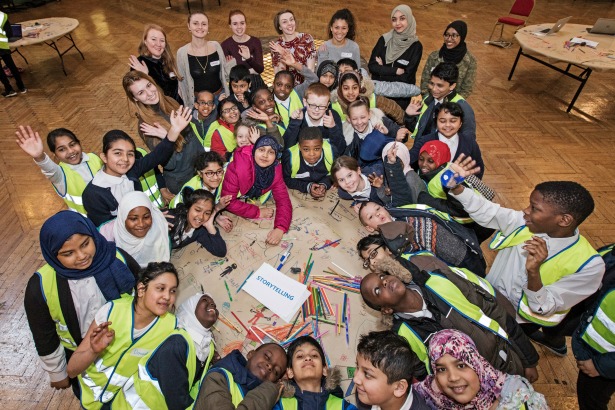 The interactive event was part of an innovative widening participation programme from QMUL’s School of Law. 38 pupils from Solebay Primary Academy joined digital craft maker Jo McCallum to explore how traditional craft techniques and the video game Minecraft can be used to explain and understand the Crown Court system.

In the course of the event undergraduate students collaborated with the Year 5 pupils to trial different creative methods and evaluate their understanding of how the law works.

Minecraft is a virtual game where individuals can create their own experiences building anything they can think of by collecting blocks. Users can also collaborate and build worlds together. Each group was also asked to think about how the courts system might work in the future, especially when considering the impact of technology.

Pupils were encouraged to use their imagination, such as creating robots that helped develop human rights. As part of the workshop they also made automated courtrooms, using Minecraft to generate the courtrooms of the future. The pupils also created the story of a major jewellery robbery.

The activities were designed to make the group think about the most important aspects of a courtroom such as the role of the judge and the presence of the jury and witnesses.

Eyram, Year 5, Solebay Primary Academy, said: “I enjoyed when we changed tables to learn new things, like how to make a court using Minecraft.”

Later this month, the same pupils will perform what they learned by roleplaying their great jewellery heist case in a real Crown Court. The School of Law plans to release the programme as an open source resource for any school to use and adapt. The pupils of Year 5 Solebay Primary Academy will be listed as co-authors on the project.

Jo McCallum, digital craft maker, said: “It was an absolute pleasure having the pupils from Solebay work with us today. Giving primary pupils the opportunity to communicate with their hands and their hearts, as well as their minds is vital in developing a rich understanding of any subject, particularly the law.”

The event took place on 26 April in QMUL’s Octagon and funded by a QMUL public engagement grant.