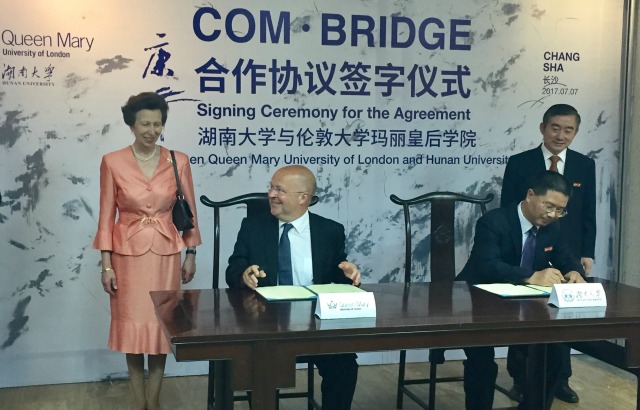 A highlight of the visit included an exhibition of artefacts made as part of a QMUL-HNU project to empower the Dong ethnic minority women in Hunan Province.

The visit from 3-7 July was The Princess Royal's third to China, aiming to showcase modern Britain and the UK's strength in sport, education, research and environmental protection. In Hunan, the Princess launched the UK's 'Spirit of Youth' campaign and the 'UK week in Hunan'. 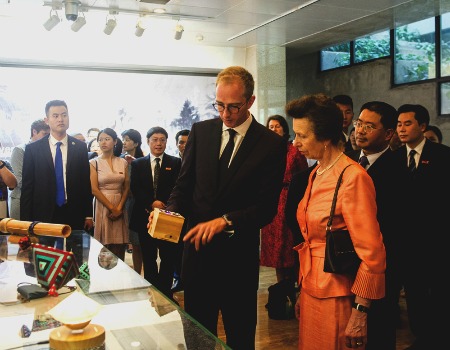 QMUL and Hunan University have been partners since 2013, when they started a joint training programme of graduate students. More recently, the two universities have worked together using IT and design to support the preservation of Hunan’s cultural heritage.

The exhibition in Hunan displayed some of the results of this collaboration: interactive music boxes which combined the culture and skills of women from the Dong ethnic minority with product design and interactive technology to create marketable products.

The collaboration, which took place in 2016, was part of the New Channel Design & Social Innovation project, initiated by Hunan University’s Art Department. The project uses an arts-based approach to help local woman use community-centred and participatory design to protect the local ecology and promote social capital.

The Princess also attended a ceremony to sign a Memorandum of Agreement (MoA) between QMUL and HNU.

Under the MoA, suitably qualified students studying an undergraduate Bachelor’s degree at HNU may apply to the Study Abroad Programme at QMUL to study as a visiting student in the final year of their degree programme.

During their time as a visiting student at QMUL, the students may apply to study a QMUL Masters (MA) degree in a related subject and with the necessary grades will be granted entry onto the course.

Professor David Sadler signed the MoA on QMUL’s behalf. He said: “Queen Mary University of London has a long history of collaboration with Hunan University, with a strong emphasis on learning from, and contributing to- local communities and cultures through sustainable innovative projects.”

“This new agreement further indicates our commitment to nurturing and developing that relationship, and we look forward to offering HNU students an enriching Study Abroad experience on our London campus,” he added.