Dr Sarah Chaney, researcher at QMUL's School of History, writes for The Conversation about our attitudes to self-harm and where they come from. 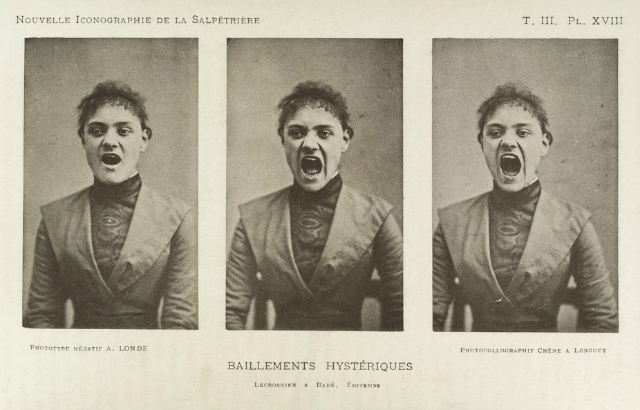 A photo by Albert Londe of a ‘hysterical’ woman taken around 1890. Wellcome Library

As I know from bitter experience, self-harm is often linked to a desire to seek attention. “What’s the point in referring you?” a GP once said to me, with obvious irritation, when I asked him for referral to a free, charity service that helped camouflage self-harm scars. “You’ll only go and do it again.”

Today, the term self-harm usually refers to superficial injuries to the surface of the skin, especially those made by cutting. In 2013, it was listed as a category for the first time in the fifth edition of the influential Diagnostic and Statistical Manual of the American Psychiatric Association.

Meanwhile, the notion that self-harm is a demanding or attention-seeking behaviour has became so ingrained in modern, Western life that today it’s seen as an obvious way of viewing self-inflicted injury – even among some doctors.

Yet the attitude that self-harm is attention-seeking has only been common since the late 19th century.

Malingerers, with and without a motive

Victorian psychiatrists were the first to consider a desire to manipulate others as a widespread motivation for self-mutilation. Before this time, each individual case was usually considered on its own terms. Yet attention-seeking was by no means the most significant of the reasons that doctors in the 19th century suggested for self-harm. These included religious conviction, demonstrations of endurance, attempted suicide, response to hallucinations and delusions and, most prominently at this time, sexual perversion.

Manipulation of others, however, was a new explanation that began to appear in the 1870s. Most of the cases these psychiatrists described had very practical benefits. Men were often accused of self-mutilation to gain financially through bogus insurance claims or the avoidance of work or duty. This made these working men malingerers in the classic sense, defined by the outcome of their act.

Women, unlike men, were categorised as “motiveless malingerers” for there seemed to be no obvious reason for their attempts to harm themselves. Their acts, doctors explained, were symptoms of hysteria, for “hysterical patients are extremely fond of attracting attention and sympathy”.

Most frequently diagnosed in women, hysteria was considered either a product of woman’s reproductive instability or her irrational, emotional mind – or both.

It is impossible to detach the diagnosis and treatment of hysteria from prevailing attitudes to gender, and this can be seen clearly in the case of self-harm. An act of self-injury might be the only symptom observed by a Victorian doctor, but nonetheless led to a diagnosis of hysteria. As an anonymous writer in the British Medical Journal put it in 1870, motiveless malingerers:

"Are almost invariably of the class of those known as ‘hysterical’. In other words, they are of the female sex, arrived at the age of puberty and unmarried. Hysterical in any more definite sense they seldom are."

For a single woman to self-harm, then, was all the evidence that was needed to make a diagnosis of hysteria. After all, “we know that hysterical women cheat in all manner of ways”. Blunt statements like this implying a desire to manipulate, made by surgeon Benjamin Collins Brodie in 1843, were later used to explain self-injury in women.

By the early 20th century, this view was often reversed. Rather than diagnosing women as hysterical as a result of self-inflicted injuries, self-harm was instead used as proof that all women (whether or not they self-harmed) were attention-seeking. Applying an evolutionary perspective to psychology seemed, to some doctors, to support this. As the doctor Frederick Parkes Weber put it in 1911, women were physically weaker than men. Therefore, they had evolved mentally to use “simulation or deception of various kinds” in order to protect themselves from men. Self-harm was, to Weber, a piece of evidence that the female brain had evolved in such a way.

This led him to the damning conclusion that: “At the present time the facility (instinct) for deception is probably greater in the average female than in the average male.”

This view of the manipulative, deceitful female self-harmer has lingered in the popular imagination, often attached to subsequent concerns about the changing role of women. In Elizabeth Ferrars’s 1942 detective novel, Don’t Monkey With Murder, female self-harm became sexualised, with the plot hinging around the self-mutilation of the beautiful, promiscuous and murderously manipulative Katharine Peach. By the 1980s, the female professional became the new trope, as in the film Fatal Attraction, in which Glenn Close plays a successful businesswoman who cuts her wrists and leg in a manipulative act of obsessive jealousy.

There is actually little reliable scientific evidence on whether more women or men self-harm today: statistics, after all, rely on who happens to come into contact with health services or otherwise and then reports injuring themselves. Describing self-harm as attention-seeking or assuming that only women self-harm tells us very little about an act of self-injury and what has caused it. It tells us much more about cultural assumptions: what is considered normal or appropriate male and female behaviour, and what stereotypes remain prevalent about the supposed emotional needs of women.

Dr Sarah Chaney is the author of a book called 'Psyche on the Skin: A History of Self Harm'. It is published by Reaktion books.