The Conservative Party has lost support in London since the election, while Labour has extended its lead to 25 points. The findings are from the latest instalment of the Polling London project by the Mile End Institute at Queen Mary University of London (QMUL) with fieldwork by YouGov.

Support for the Labour Party in London is at 55 per cent, equal to the share the party received in the 2017 general election. Support for the Tories is at 30 per cent, down three points since the election. The Lib Dems have the support of eight per cent of Londoners, Ukip is on three per cent, and the Greens are on two per cent.

When asked about voting intention for the local elections, due next year in London, 41 per cent say they intend to vote Labour, while 22 per cent intend to vote Conservative. Excluding don’t knows and those who would not vote, that would put Labour on 53 per cent and the Conservatives on 29 per cent. If Labour manages to poll that well next year, it will be the best performance by any party in London elections since 1971. 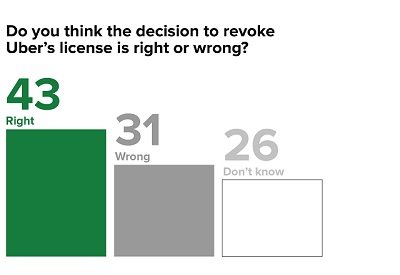 The survey also reveals that the decision to remove Uber’s licence has caused no political damage to the Mayor of London Sadiq Khan. He remains popular with Londoners – 58 per cent think he is doing a good job. Khan also enjoys strong support when asked about his effectiveness in comparison to Boris Johnson and Ken Livingstone, his predecessors as Mayor. All three enjoy positive net ratings (i.e. the percentage who think they did, or are doing, a good job is greater than the percentage who think they did a bad job). Boris Johnson is least popular (with a net approval score of +6), followed by Ken Livingstone (+20), with Sadiq Khan most popular (+34).

Professor Philip Cowley, Director of the Mile End Institute at QMUL said: London remains very positive territory for Labour and is looking increasingly dicey for the Tories. Labour’s election result was spectacular and these results show that they may do even better next time out. The numbers are not good for the Tories and should add to worries about how the party will perform in next year’s local elections.”

The survey also asked Londoners how they feel about the cancellation of the proposed “Garden Bridge”. One in three (33 per cent) are pleased that it’s been scrapped, one in five (20 per cent) are disappointed, and 34 per cent don’t have a view either way.

The data is available here.