"With such a small piece of cloth, how do you choose what to cover?"

In her second blog post from Cambodia with RESULTS UK, QMUL's Dr Jess Potter reports from a multidrug-resistant tuberculosis ward in Phnom Penh and highlights the impossible choices that have to be made with limited funding. 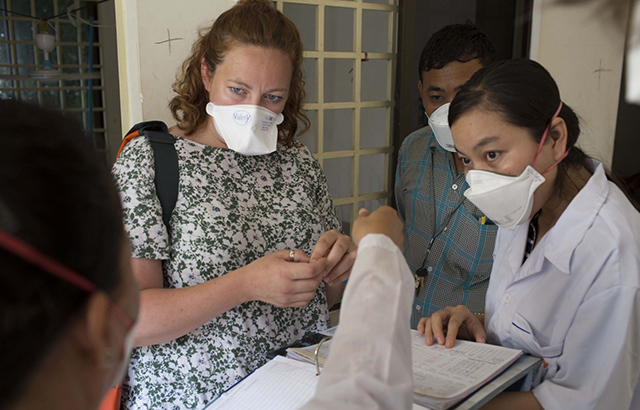 Today we are back in Phnom Penh at the National Centre for Tuberculosis (CENAT) to see their multidrug-resistant tuberculosis (MDR-TB) ward. The moment we arrive we are confronted by a van with a patient lying in the back, an oxygen tank tucked in the corner and her young daughter crouched by her side.  The elderly lady looks gaunt and frail and both women are wearing masks.  She was diagnosed with MDR-TB using GeneXpert and was transferred in to CENAT to start treatment and is now being taken back to her village where she will continue to be managed by the local health centre there.

The patient pathway and strong links developed across the community have been clear to see throughout our time here. Treatment completion rates, largely due to the highly successful DOTS (Directly Observed Therapy – Short Course) programme, are running at 90 per cent and MDR rates have gradually fallen over the past decade. The National TB Programme (NTP) is clearly well designed and has achieved global and national targets year on year.  Despite this, Cambodia remains amongst the World Health Organization (WHO) high burden TB countries.

To explain why, let me continue our journey around the national hospital.  Next stop is the 13 bed intensive care unit.  In the UK this would include ventilators, dialysis machines, pressure mattresses, one to one nursing and the air would be punctuated by the rhythmic beating of life sustaining treatments.  Here there is only oxygen and staff.

During our visit to the intensive care unit we find the most severe TB cases with lungs so damaged the patients cough up life threatening quantities of blood or cannot transfer oxygen into the body to keep the organs functioning.  Then there are those who die from side effects of treatment such as severe liver failure.  If you are unwell enough to end up here, the outlook is bleak.

Back on the MDR-TB ward we meet our first patient.  Ly Meng is a factory worker and became unwell last year with fever, cough and night sweats.  This is the second time he has had TB and now it is resistant to the two most powerful anti-tuberculosis drugs we have: rifampicin and isoniazid.  About 10 per cent of people who have had TB treated previously have MDR-TB in Cambodia.  For these people more toxic drugs are required over a longer period of time to have any chance of a cure.  Consequently side effects are harsh and inevitable. 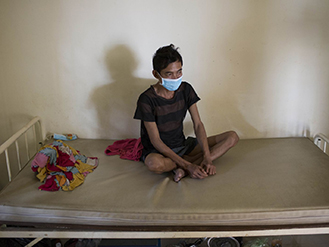 This week Ly is back in hospital with nausea and vomiting and needs fluids.  He also has significant hearing loss – a common side effect of one of the injectable group of drugs used to treat MDR-TB.  We meet several other patients who all have similar complaints.  There are no facilities to monitor for hearing loss here and so no nuanced discussion about how long to continue injectables versus the risk of permanent serious hearing loss like we have amongst our team in the UK – the aim here is survival.

As if this is not enough, Ly was diagnosed with HIV in 2010. Now that he is co-infected with both HIV and MDR-TB his family have abandoned him and no one comes to visit him in hospital – such is the stigma associated with both these diseases.  In Cambodia, like most countries, TB treatment is free.  This does not mean there is no cost to the patient. Alongside the stigma associated with TB itself comes the shame of no longer being able to provide for your family.

Dr Mao, Director of the National TB Programme (NTP), explains that the key to ending TB here is to close the resource gap.  According to the WHO, in 2015 just 12 per cent of the TB programme here was funded domestically, 47 per cent by foreign donors and 42 per cent remained unfunded.  That is 42 per cent of the money required to deliver the carefully costed and well thought-out strategy to fight TB in Cambodia is missing.

Each year Dr Mao has to make some tough choices. Without support from the Global Fund, the situation would be dire.  Take TB in children for example: Between 2010 and 2015, according to Dr Mao, a strategy including health worker training, community contact tracing, hospital review of all child contacts and funding for transport for children was rolled out across 27 of approximately 100 health districts.  The plan from 2015 onwards was to expand this to cover the entire country.  There are no longer funds to do this.  As he tells us, “There is a Khmer saying, ‘If you have just a small bit of cloth, how do you choose which piece of you to cover?’” With such a large gap in funding and so much at stake, the choices are heart breaking.