Unexpected findings reveal insight into how cancer spreads in the body

Cancer cells appear to depend on an unusual survival mechanism to spread around the body, according to an early study led by Queen Mary University of London (QMUL). The discovery could help with future development of novel treatments to prevent metastasis and secondary tumours. 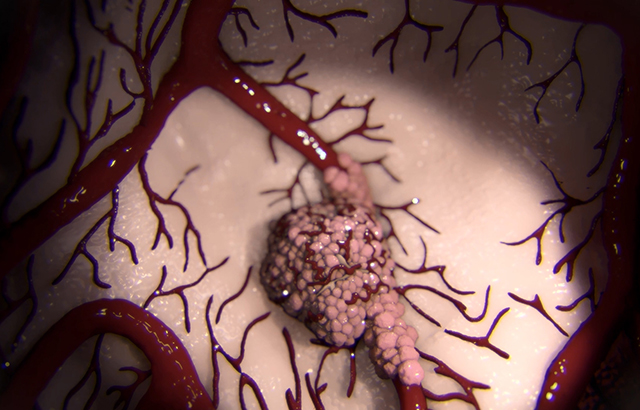 The spread of cancer around the body - metastasis - is one of the biggest challenges in cancer treatment. It is often not the original tumour that kills, but secondary growths. These happen when cancer cells are able to break away from the primary site, travel around the body and ‘seed’ new tumours.

A key question in cancer research has been how cancer cells are able to survive once they break away from a tumour to spread around the body. Cells are relatively protected when they are attached to other cancer cells and their surroundings, but become more vulnerable when they detach and ‘float’, and normally undergo cell death.

Lead researcher Dr Stéphanie Kermorgant from QMUL’s Barts Cancer Institute said: “Metastasis is currently incurable and remains one of the key targets of cancer research. Our research advances the knowledge of how two key molecules communicate and work together to help cancer cells survive during metastasis. We’re hoping that this might lead to the discovery of new drugs to block the spread of cancer within the body.”

The study, published in Nature Communications, examined the changes that occur in cancer cells as they break away from tumours in cell cultures, zebrafish and mice. The researchers revealed a previously unknown survival mechanism in cancer cells and found that molecules known as ‘integrins’ could be key.

Integrins are proteins on the cell surface that attach to and interact with the cell’s surroundings. ‘Outside-in’ and ‘inside-out’ signalling by integrins is known to help the cancer cells attach themselves to their surroundings. But the study suggests that when the cancer cells are floating, as they do during metastasis, the integrins switch from their adhesion role to take on an entirely new form of communication which has never been seen before – ‘inside-in’ signalling, in which integrins signal within the cell.

The researchers discovered that an integrin called beta-1 (β1) pairs up with another protein called c-Met and they move inside the cell together. The two proteins then travel to an unexpected location within the cell which is normally used to degrade and recycle cell material. Instead the location is used for a new role of cell communication and the two proteins send a message to the rest of the cell to resist against death while floating during metastasis.

Using both breast and lung cells, the team found that metastases were less likely to form when β1 and c-Met were blocked from entering the cell together or were prevented from moving to the special location within the cell.

Integrins are already major targets for cancer treatment with drugs either being tested or in use in the clinic. Most integrin inhibitor drugs target their adhesive function and block them on the surface of the cancer cell. The researchers say that the limited success of these drugs could be partly explained by this newly discovered role of integrins within the cancer cell.

A new strategy could be to prevent the integrin from going inside the cell in the first place. The researchers hope that these insights could lead to the design of better therapies against metastasis and more effective treatment combinations that could prevent and slow both tumour growth and spread.

Baroness Delyth Morgan, Chief Executive at Breast Cancer Now, said: “This promising early research identifies a potential new way that cancer cells are able to survive once they have broken free of their primary tumour in the breast.

“Once breast cancer spreads it can be controlled for a while but sadly it cannot be cured. It’s the main reason that around 11,500 women in the UK still lose their lives to this dreadful disease each year and we urgently need to improve our understanding of how breast cancer cells are able migrate across the body.

“This discovery opens new doors for scientists to try to stop breast cancer spreading and to ultimately save lives, and we look forward to future developments in this exciting area of research.”

Dr Susie Gray, Research and Communications Officer at Rosetrees Trust said: “Rosetrees Trust is delighted to support Dr Kermorgant’s work. We hope that our support of this exciting research will one day lead to better treatments that can prevent the spread of cancer.’’

The team carried out part of their animal research work on zebrafish embryos in order to implement the principle of 3Rs (refine, reduce, replace) on their research on mice. Zebrafish provide a similar tumour microenvironment to humans, meaning fewer tests need to be carried out in mice and any future experiments in mice will have been optimised to have minimal toxicity. They are aiming to reduce the number of mice used by at least 90 per cent and ultimately use zebrafish to completely replace the use of mice.