Most twins should be delivered at 37 weeks to minimise deaths

Scientists at Queen Mary University of London (QMUL) have analysed the twin pregnancies of more than 30,000 women to identify the ideal delivery period in an attempt to reduce rates of stillbirth. 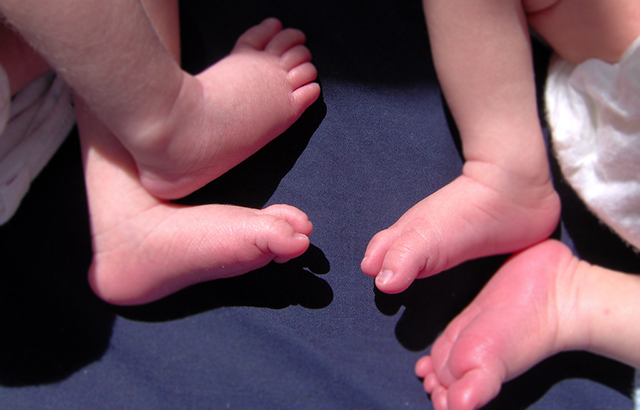 In the largest review of its kind the researchers recommend that in the case of pregnancies without complications, women with dichorionic twins (twins with separate placenta) should be offered delivery after 37 weeks. They also recommend that women with monochorionic twins (twins that share the same placenta) should not be offered delivery before 36 weeks.

The study was published in the British Medical Journal. 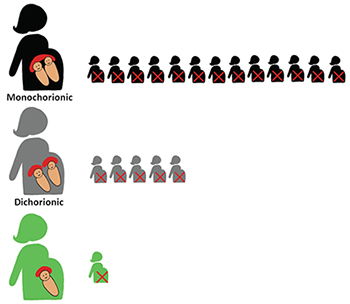 Uncomplicated twin pregnancies are often delivered early in an attempt to prevent late stillbirth but delivery before term can lead to neonatal complications associated with prematurity.

Professor Shakila Thangaratinam, of the Women’s Health Research Unit at QMUL’s Blizard Institute, said: “Until now, we did not have clear recommendations on the best time to offer delivery to mothers with twin pregnancies. We know that women with twin pregnancies have a higher risk of stillbirth compared to women with singleton pregnancies, and this risk gets higher the later they are in pregnancy. However, earlier delivery can put the babies at risk of problems associated with being born prematurely including neonatal death.”

Since 2005, the number of patient safety incidents involving multiple pregnancies, including unexpected stillbirth and neonatal death, has risen by 419 per cent in the UK, and peaked in 2013-14, resulting in payouts of over £90m.

Professor Thangaratinam added: “There is a global drive to prevent stillbirths and we know that twin pregnancies are a major risk factor for stillbirths in high income countries. We hope that this research will help to complement national and international efforts to reduce the rates of stillbirth and unexpected neonatal complications in babies from women with twin pregnancies and will be useful to national guideline and hospital policy makers.”

The research was carried out in collaboration with the Global Obstetrics Network (GONET). 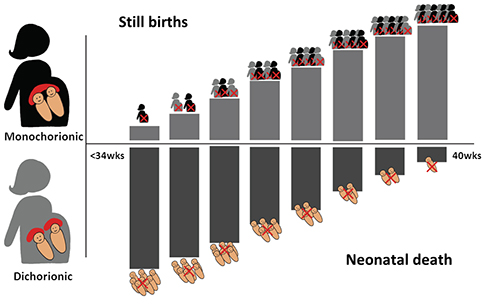 Change in risk of stillbirth vs neonatal death