Teams of students from Queen Mary University of London (QMUL) and Beijing University of Posts and Telecommunications (BUPT) took part in a challenge to hack robots to make them identify hot and coloured lanterns. 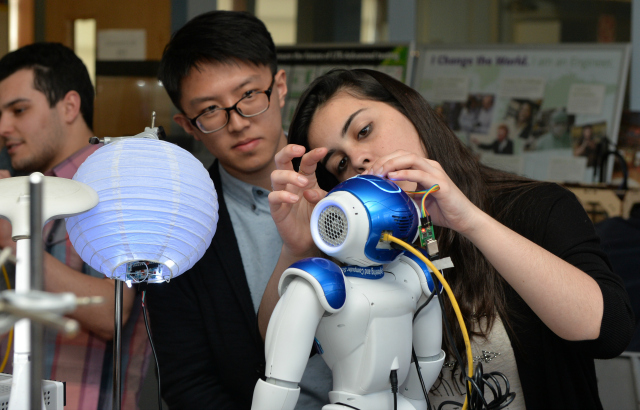 The Design and Build Winter Hack workshop was the first QMUL-BUPT Joint Programme (JP) Innovation Centre initiative and was held in the Electronics Lab at the Mile End campus.

In total, ten students from the JP in Beijing travelled to London and joined seven undergraduates from the School of Electronic Engineering and Computer Science (EECS) to take part in the challenge using the Aldebaran NAO robots.

The event, which ran from February 22 to 26, coincided with the Chinese Lantern Festival, a celebration to mark the year of the monkey 2016.

Once the five teams had been introduced to the robots by Dave Snowdon, from UKNAO, they constructed an LED cube that was used as a light source for the lantern and set about programming their robots to sense heat and recognise colours.

The winners of the Hack were team "Bilibili" while the runners-up were team "I.Robot". One student commented: "We had learnt so much outside the classroom: not only a new programming language – Python - but also the way that we should properly deal with real and advanced robots like NAO."

Dave Snowden said: "The winners have innovatively solved the challenge in a robotic way – they make use of dialogues and gestures in response to different lanterns."

The demonstration was also attended by Professor Geraint Wiggins, Head of EECS, and Professor Peter McOwan, Vice Principal (Public Engagement and Student Enterprise). Professor Wiggins said: "It is the most enjoyable Friday afternoon that we had all year and we are glad to be part of these exciting demonstrations by our students."

Dr Yue Chen, QM Director of the JP and the Innovation Centre, closed the week-long Hack by highlighting the massive effort put in by supporting staff to make the event happen. In particular, Dr Matthew Tang, the coordinator of the whole event, was also presented with a plaque in recognition of starting this special annual transnational activity.