After more than 300 years of looking, scientists led by Queen Mary University of London, have figured out how bacteria “see” their world. And they do it in a remarkably similar way to us. 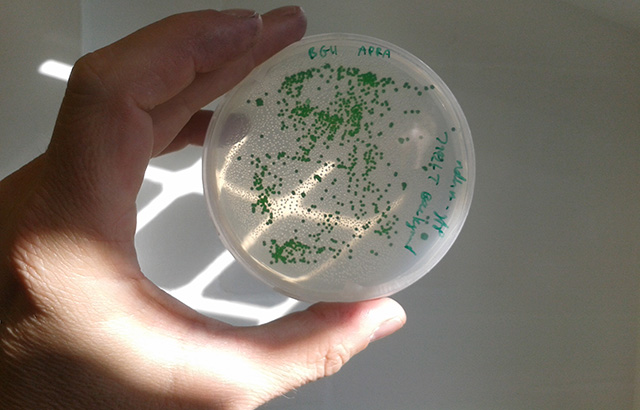 A team of British and German researchers reveal in the journal eLife how bacterial cells act as the equivalent of a microscopic eyeball or the world’s oldest and smallest camera eye.

“The idea that bacteria can see their world in basically the same way that we do is pretty exciting,” says lead researcher Conrad Mullineaux, Professor of Microbiology from QMUL’s School of Biological and Chemical Sciences

Cyanobacteria are found in huge numbers in water bodies or can form a slippery green film on rocks and pebbles. The species used in the study, Synechocystis, is found naturally in freshwater lakes and rivers. Cyanobacteria evolved around 2.7 billion years ago and the fact that they are able to produce oxygen and fix carbon dioxide using energy from the sun – photosynthesis - is thought to have caused mass extinctions and the oldest known ice age.

As photosynthesis is crucial to the survival of these bacteria, scientists have sought to understand how they sense light.

Previous studies have shown that they contain photosensors and that they are able to perceive the position of a light source and move towards it, a phenomenon called phototaxis.

The current study reveals that they are able to do this because the cell body acts like a lens. As light hits the spherical surface, it refracts into a point on the other side of the cell. This triggers movement by the cell away from the focused spot.

Within minutes, the bacteria grow tiny tentacle-like structures called pili that reach out towards the light source. As they attach to the surface that they’re on, they retract and pull the bacteria along. 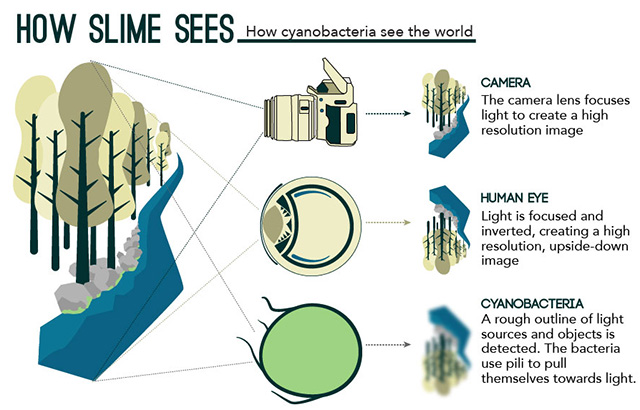 “The fact that bacteria respond to light is one of the oldest scientific observations of their behaviour,” says Professor Mullineaux.

He adds: “Our observation that bacteria are optical objects is pretty obvious with hindsight, but we never thought of it until we saw it. And no-one else noticed it before either, despite the fact that scientists have been looking at bacteria under microscopes for the last 340 years.”

Synechocystis serves as a spherical lens but the team think that rod-shaped bacteria can also trap light and sense the direction it is coming from using refraction, acting like an optical fibre.

The findings are most likely an example of convergent evolution between bacteria and more complex multi-cellular organisms including animals and humans.

“The physical principles for the sensing of light by bacteria and the far more complex vision in animals are similar, but the biological structures are different,” says co-author Annegret Wilde from the University of Freiburg.

A Synechocystis cell is about half a billion times smaller than the human eye. As with the retina in the human eye, the image on the rear of the cell will be upside down. But its resolution will be much lower, so only a blurred outline of any object can be perceived. The ability of optical objects to distinguish fine detail is determined by “angular resolution”.

In the human eye this is an impressive 0.02 degrees. The team estimate that in Synechocystis it is about 21 degrees.