School students from across Dulwich and Sutton are set to learn all about particle physics by detecting their own cosmic rays. 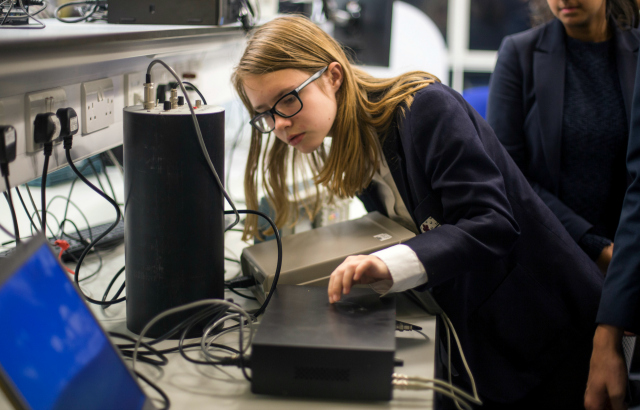 Students from five schools* have been loaned muon detectors, fundamentally the same sort of technology used in the cutting-edge international experiments at the Large Hadron Collider at CERN which the QMUL Particle Physics Research Centre is directly involved with.

The detectors allow a number of avenues of exploration into these particles and will give the students an opportunity to get a hands-on understanding of signals and backgrounds observed in the pioneering CERN experiments.

Dr Jeanne Wilson, Reader in Particle Physics at QMUL’s School of Physics and Astronomy, said: “Considering how these signals and backgrounds can be probed in a desk-top setup will help students relate to the larger experiments we work on, and introduce the thought processes required to collect and analyse complex data sets.”

Cosmic rays are incredibly energetic charged particles (mostly protons) of galactic origin. They hit the top of the atmosphere, creating a shower of exotic particles including muons (heavier but unstable cousins of electrons). Because muons are incredibly penetrating and thanks to special relativity, a great deal of these particles reach the ground.

Dr Martin Archer, Outreach Officer at QMUL’s School of Physics and Astronomy, added: “The Cosmic Ray Muon Research Project is a fantastic opportunity for school students to gain experience and insight into how particle physics research works. Through collaboration with QMUL, the students and teachers will develop their understanding of particle physics theory, detectors, experiment design and analysis techniques first-hand through their own independently motivated studies over the next six months.”

The project is part of QMUL’s Research in Schools programme which encompasses two further research projects involving other schools. This will culminate in the students presenting their work at a conference to be held at QMUL.