Scientists at Queen Mary University of London (QMUL) have revealed the network infrastructure used by Netflix for its content delivery, by mimicking the film request process from all over the world and analysing the responses. 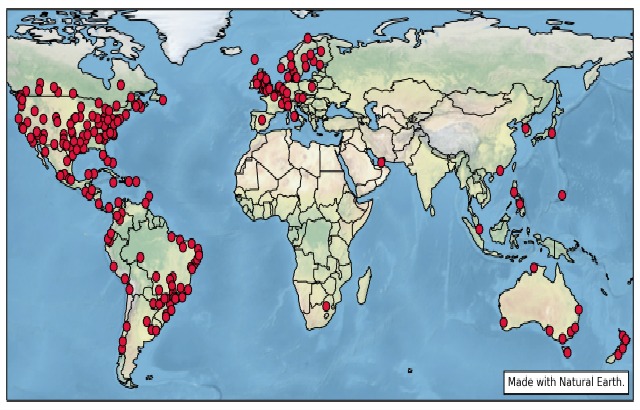 The study is believed to be the first to map Netflix’s physical server distribution all over the world.

Researchers from the School of Electronic Engineering and Computer Science found servers deployed at 233 locations across six continents. Their results show that the USA accounts for a vast majority of the traffic, unexpectedly followed by Mexico, UK, Canada, and Brazil. Their findings confirm the importance of various regions as major Netflix markets, judging by the sheer server deployment in them.

As one of the world’s largest video on demand platforms, Netflix delivers a large amount of Internet traffic. But it has so far remained a mystery how the platform delivers its traffic, in order to avoid video stalling during playback.

Over April and May 2016, the five researchers from QMUL requested videos from university computers, localising the requests using a browser extension. They studied the traffic delivered by the servers in each region, highlighting the relative reliance on Internet eXchange Points (IXPs) and Internet Service Providers’ (ISPs) servers.

The findings expose significant differences between countries and continents. While in North America, Netflix is present in many locations simultaneously, the deployment situation in Europe is different. For most countries in Europe, Netflix servers are deployed at only a few, probably carefully chosen locations per country. The notable exception to this scheme is the United Kingdom, where the researchers observed widespread deployment across the whole country, particularly within ISPs. On a per country level, the study pinpointed different strategies used by Netflix to choose the locations to place servers in.

Timm Boettger, first-author of the paper said: “The study is important as it provides an insight into how today’s Internet works. The different deployment strategies observed are caused by inherent regional differences, forcing Netflix to adapt its strategy to ensure low movie start-up times and to avoid video stalling during playback. These differences are not only caused by how well an ISP connects its end-users, but also by how well different intermediary networks and ISPs interconnect and exchange traffic.”

Professor Steve Uhlig, the senior supervisor of the team and Principal Investigator of the Horizon 2020 ENDEAVOUR project that supported this work, said: “This study highlights the importance of the still vastly underappreciated IXP ecosystem. Indeed, IXPs are vital to supporting high-speed connectivity in the Internet, especially for large content delivery players such as Netflix. This study supports the need to carry out more research relevant for IXPs, as done within the ENDEAVOUR project.”

The paper, titled “Open Connect Everywhere: A Glimpse at the Internet Ecosystem through the Lens of the Netflix CDN”, has been published on the ArXiv website.