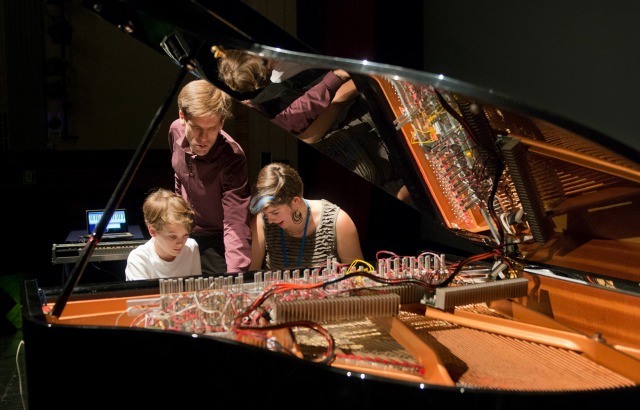 The lecture, hosted by QMUL and the Institute of Engineering and Technology (IET) on December 14, was given by Dr Andrew McPherson who discussed the limitations of traditional instruments and presented some of his own creations to the audience of students, parents, teachers and the public.

“There are lots of things you can do with a piano, but one of the things you can’t do is continuously shape a note after you’ve played it,” Andrew explained. “You press a key, the hammer hits the string, and that’s it.” As a viola player, Andrew is used to altering notes by bending the pitch or playing vibrato, for example.

Willing young helpers were enlisted during the talk to improvise on one of Andrew’s own creations the Magnetic Resonator Piano (MRP) which - when you alter pressure, position and other elements - allows you to keep shaping the sound even after pressing down.

He also demonstrated TouchKeys, a new musical instrument that transforms the piano-style keyboard into an expressive multi-touch control surface. The TouchKeys are touch sensors that can be added to the surface of any keyboard, measuring the location of the musician’s fingers on the keys during performance.

Augmenting keyboards with additional expression is a tradition that goes back nearly a century. Inventors have tried keys that bend and wiggle, add-ons from pulleys to ribbons, wheels, and pressure sensors, and more – anything to extend the piano and organ beyond their on/off playing methods.

Following the lecture, hot drinks and festive mince pies were served alongside an exhibition full of instruments created in the school of Electronic Engineering and Computer Science at QMUL. Instruments ranged from the Arduinitar, an Arduino (microcontroller development platform) controlled guitar to the Collidoscope (collaborative musical microscope).

The event was run in conjunction with the IET (Institute of Engineering and Technology) which promotes STEM activities within schools to encourage the profession.