The general public are invited to follow scientists from around the globe as they search for an Earth-like exoplanet around the closest star to us, Proxima Centauri. The observing campaign called Pale Dot Red is launched today, and coordinated and led by astronomers at Queen Mary University of London (QMUL). 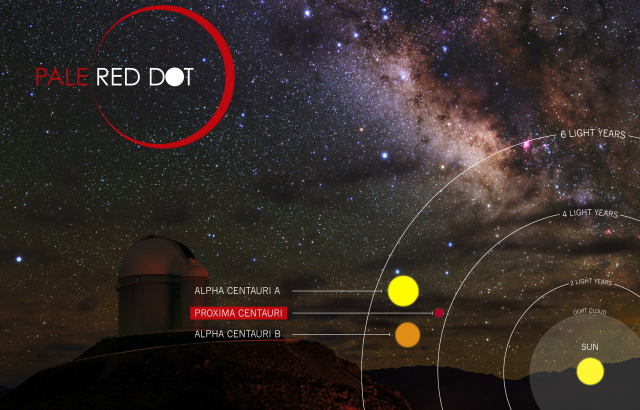 The campaign runs until April 2016 after which scientists will submit their data analysis to a peer-reviewed journal for publication.

At a distance of just 4.2 light-years from the Sun, and located in the constellation of Centaurus, Proxima Centauri is the closest known star to the Sun. Previous observations have provided tantalising, but weak hints of a small companion orbiting this red dwarf star, but this new campaign will make a more sensitive search for the telltale wobbles in the dwarf star’s orbital motion that might reveal the presence of an Earth-like orbiting planet.

The Pale Red Dot outreach campaign gives the public the opportunity to see how science is done in modern observatories, and how teams of astronomers with different specialities work together to collect, analyse and interpret data, which may or may not be able to confirm the presence of an Earth-like planet orbiting our nearest neighbour.

Observations will be made with HARPS (1) spectrometer at the ESO's La Silla observatory, which will be complemented by images from an assortment of robotic telescopes located across the world. These include BOOTES (2) and LCOGT (3), which will support the search by measuring the brightness of Proxima Centauri every night during the two and a half month long project. These observations will help astronomers determine whether any detected wobbles in the star’s motion are caused by features on its turbulent surface or by an orbiting planet.

Project Coordinator Dr Guillem Anglada-Escude, from QMUL’s School of Physics and Astronomy, said: “We want to share the excitement of the search with people and show them how science works behind the scenes, the trial and error process and the continued efforts that are necessary for the discoveries that people normally hear about in the news. By doing so, we hope to encourage more people towards STEM subjects and science in general.”

The Pale Red Dot outreach campaign will illuminate the often unseen side of planet hunting with background articles and through social media. A bustling array of blog posts on many topics — including planet-hunting techniques, ESO’s European Extremely Large Telescope (E-ELT), and the lives of stars — are planned, written by the astronomers, scientists and engineers from the observatories involved, as well as science writers, observers and other experts in the field.

The name of the campaign was inspired by the famous “pale blue dot” image of the Earth, taken in 1990 by Voyager 1 on its way to interstellar space. The phrase was later used by Carl Sagan for his essay, Pale Blue Dot: A Vision of the Human Future in Space. As Proxima Centauri is a red dwarf star, astronomers expect that an exoplanet orbiting it will appear reddish. At the same time, just as Voyager’s image of Earth was a remarkable achievement for humanity, finding an Earth-like exoplanet around the closest star to us would be a another step towards answering humanity’s biggest question: Are we alone?

The Pale Red Dot campaign will begin in earnest on Friday 15 January 2016 with observations commencing just three days later from ESO’s La Silla Observatory, situated at the edge of the Chilean Atacama Desert, and continuing until the first week of April. All of the scientific data obtained as part of the project are expected to become publicly available for all to exploit in late 2016.

Find out more about studying Astronomy at QMUL on the School of Physics and Astronomy website.