What do robots performing comedy, music boxes from China and a jelly pudding have in common? These are just three of the projects that were on display at the Intersections exhibit, which showcased work from the Media and Arts Technology CDT at Queen Mary University of London (QMUL). 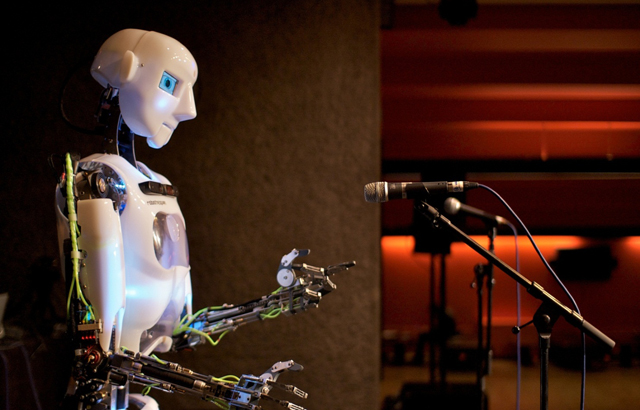 The work of the MSc and PhD students explored the symbiotic relationship between the arts and science by using immersive installations, such as sound; displays that have a tactile component; kinetic sculptures, and much more

Hengling Music Boxes
Inspired by the Dong ethic minority culture in rural China, the four artifacts were created in a pop-up space in Hengling Village in Changsha Province. They were made using traditional crafting methods but with a modern twist. For example, the box Dong Tunes is a made in the image of a traditionally shaped Lucky Flower decoration, which is used by the Dong community for good luck. When the user turns and tilts the box to interact with the sound, they hear different stories told in the local language. The project is a collaboration between Hunan University, QMUL and b00t Consultants and this is the first time they were displayed in the UK.

Mood Glove
This hi-tech vibrating glove brings a film’s soundtrack to life by sending subtle movements through the hand during intense moments to heighten the emotional impact. The glove is fitted with five vibrating discs that are deployed to deliver pulses at different frequencies and intensities to the back of the hand. The project team gathered responses from participants by showing them clips from various scenes from films that included Edward Scissorhands, Memento and Amelie.

Axis
A kinetic sculpture made by 20 independent controllable motors is based on the Fibonacci sequence, where every number in the sequence is the sum of the two preceding it; Phi, the 21st letter of the Greek alphabet, and the mathematics of nature.

“Students from the Media and Arts Technology programme take many forms,” said Dr Nick Bryan-Kinns, director of the MAT programme and Reader in Interaction Design at QMUL’s School of Electronic Engineering and Computer Science.

“Some are established artists, others are engineers with an interest in media and a creative flair. The Intersections exhibition was a chance to showcase some of the projects alongside an academic symposium.”

Intersections was held at the Mile End Arts Pavilion from Saturday 10 to Thursday 15 September. As well the public exhibition and academic symposium, there were performances from electronica artists in the evening, including a special performance using the Magnetic Resonator Piano, which has electromagnets on its piano strings that bend the sound and create new music in the process.