Two QMUL projects have been shortlisted for The Guardian University Awards 2016. 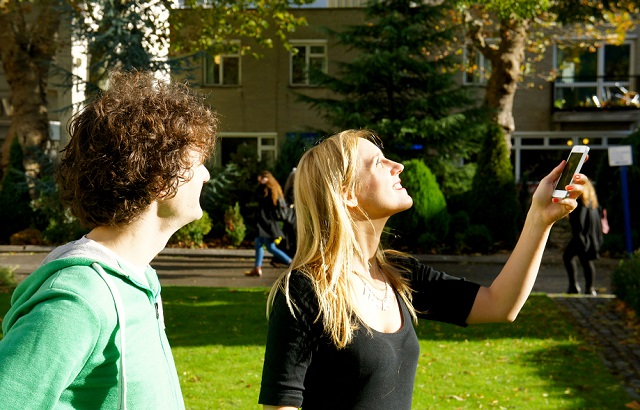 Warblr, an app which identifies birdsong and calls, has been selected for the Digital Innovation category while QConsult, which places students from low-income families into east London businesses to conduct mini consultancy projects, has been nominated for the Employability Initiative category.

The winners will be announced at the awards ceremony on 16 March.

Warblr is the work of QMUL machine learning researcher Dan Stowell and his business partner Florence Wilkinson who launched it in August 2015. Since then it has amassed nearly 3,500 paying users.

Florence said: "We're absolutely delighted to have been shortlisted for a Guardian University Award in the new Digital Innovation category. We have two clear aims with Warblr – use technology to reconnect people with the natural world, and gather data to aid research and conservation through citizen science. In an era where almost everyone has a smartphone this has allowed us to place technology developed in the labs at QMUL firmly in the hands of the general public. And the beauty of it is that whilst enjoying the app our users are feeding back into our research – and the research of others – through the data they send us.

“We'd like to thank QM Innovation in particular for its support, without which we would never have been able to get this project off the ground, and we'll be keeping everything crossed until the winner is announced!"

QConsult, which is supported by J.P. Morgan, was launched in March 2015 and since then 80 students have been placed with 16 businesses – on target for 120 students and 24 businesses by July 2016. The project helps close the equality gap by raising the confidence, social capital and employability of students from low-income backgrounds and offers an affordable opportunity for businesses facing challenges during a crucial developmental stage.

Emily Huns, Head of Careers and Enterprise, said: "We're delighted to be shortlisted. The QConsult supported by J.P. Morgan programme is one of five work experience schemes run by the QMUL Careers and Enterprise Team – and it is one of which we're particularly proud. Whilst only in its first year, the programme has already transformed the employability of many of the students taking part and engaged east London growth sector businesses in a really innovative way. J.P. Morgan has supported us generously and constructively throughout – through staff mentoring and board room space as well as through vital funds. We're looking forward to the award ceremony."

For more info on QConsult head here. To download Warblr on Android on iOS head here.