People with experience of homelessness have gained visibility at the opening ceremony of the 2016 Rio Olympics, thanks to a project co-produced by People’s Palace Projects (PPP), based at Queen Mary University of London (QMUL). 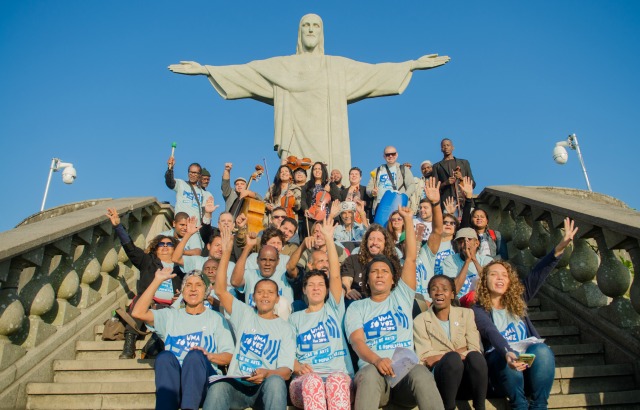 The Uma só Voz choir, formed by people with experience of homelessness and supported by PPP, Streetwise Opera and Rio City Council’s Secretariat for Social Development, sang and received the Olympic torch at the iconic Christ the Redeemer statue overlooking Rio during the official Olympic opening day on Friday 5 August.

This is only the second time homeless people have been officially represented at an Olympic event.

The 40-strong choir came out of Uma Só Voz/With One Voice, a successful arts and homelessness project jointly produced by PPP and Streetwise Opera, a charity that uses music to help people make positive changes in their lives.

The choir was invited to take part in the ceremony after their success in the Rio 2016 Cultural Olympiad. Between 19 and 23 July, the Uma Só Voz project staged an artistic occupation of Rio streets with pop-up performances and workshops involving homeless people. The event brought together people with experience in homelessness from Rio, and artists, policy-makers and ex-homeless people from the UK, Australia, Japan, the USA and Portugal.

With One Voice began at the London 2012 Cultural Olympiad with more than 300 homeless performers demonstrating their artistic achievements in a showcase at the Royal Opera House. A three-year project followed in Rio with exchanges between different countries and projects leading up to the 2016 Cultural Olympiad.