Five people have been made fellows of QMUL during the 2016 summer graduation. 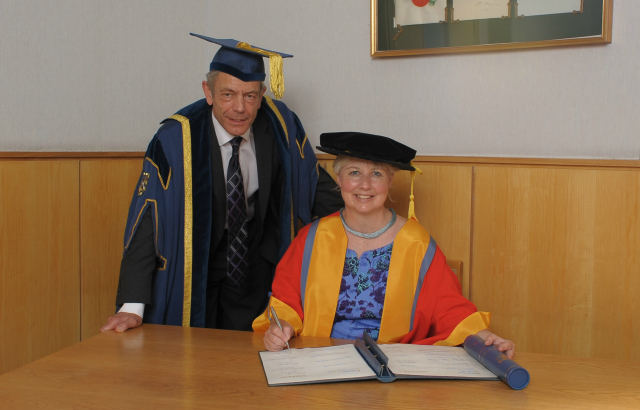 The Fellowship is normally conferred on a person or persons of distinction who has rendered significant service to QMUL or to the community, or with a demonstrable connection to or affiliation with QMUL.

Mr Nicholas Hillman: Widely viewed as one of the leading experts, and most experienced practitioners, working in the field of higher education policy in the UK. He has been the Director of the Higher Education Policy Institute (HEPI) since January 2014. Before that he worked for the Rt Hon David Willetts MP, the Minister for Universities and Science, from 2007 until the end of 2013, as Chief of Staff and then Special Adviser in the Department for Business, Innovation and Skills.

He has written widely for a range of policy organisations, think tanks and journals. His recent pamphlets for HEPI include an assessment of the impact of students in the general election of 2015 and a comparison of the UK and German higher education systems. Nick is an alumnus of QMUL, and has remained closely involved with the university, offering expertise and advice on a range of issues.

Thomas Kielinger OBE: Thomas Kielinger is one of the most respected German-speaking foreign correspondents in the UK. His contribution to the development of Anglo-German cultural relations is exemplary as a journalist and author, most recently of highly acclaimed biographies on Queen Elizabeth II and Churchill. As the UK culture correspondent of one of Germany’s leading broadsheets Die Welt since 1998, Thomas has played a major role in intellectually substantial reflections on Anglo-German relations.

Mr Michael Smith: Michael Smith has made major contributions to healthcare, formerly as Chairman of Nuffield Health, of NHS Trusts and as Managing Director of BUPA.

This Fellowship at QMUL recognises the exceptional leadership and enthusiasm he has provided over the past eight years to the Barts Charity, building their assets from £200 million to over £374 million. This has enabled the Charity to disburse over £70 million toward the new hospitals at Barts and the Royal London and the research mission of QMUL.

His leadership at the Charity has directly facilitated excellence in clinical care, teaching and research, ensuring state-of-the art facilities for hospitals within Barts Health NHS Trust. Michael and his trustees have made over £3m available to found a new Diabetes Kidney Centre with cutting edge research at QMUL to target a major cause of death and disability in east London.

In 2015 the new Barts Heart Centre opened and provided the opportunity to unite the clinical and research activity of three hospitals (the London Chest, University College London Heart Hospital and Barts) in a new £400m hospital at Barts. The Barts Charity gave £10.2m toward excellence in cardiovascular care, research and training, which has already helped reduce length of stay by 4.2 days and saved an extra 300 lives in its first year.

Mrs Heather MacRae MA: Heather MacRae is passionate about creating out-of-this-world projects that inspire teenagers. Working with QMUL, Heather has received awards for projects such as Mission X: Train Like an Astronaut, Media Space and Our Space. Heather leads the Principia Space to Earth Challenge. She has just published AstroTim, an augmented reality app to celebrate Tim Peake’s mission. Heather is founder of Venture Thinking and managing director of the Ideas Foundation, a charity devoted to nurturing creativity and driving diversity.

Ms Elizabeth Hall: Elizabeth Hall’s career includes posts in the Civil Service with time spent in the Prime Minister’s Office and in Europe. She also worked at Aberdeen University and in several financial organisations before eventually moving on to the Financial Services Authority. Based in the East End, she has been heavily involved with the local community and diocese, as well as QMUL. A member of Council for nine years, and Vice Chair for three, she has brought to the university both a deep commitment to its values and a real understanding of how these needed to be translated into practical help for students and staff. Her Fellowship recognises her tireless activities in pursuit of this aim.